Dress Up A Plain Picture Frame

I had these picture frames {that hold a 4x6 size picture} hanging around with a couple of old pictures in them. I had taken some new pictures of my kids on Christmas Eve and since I printed out the pictures in 4x6 size, I thought I could re-use these frames. Just simple, plain black frames. 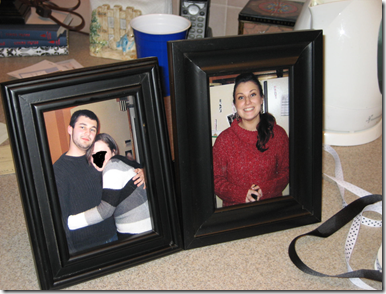 On one of my many trips to Michaels I had picked up two of these fleur de lis pendants {$2.79 each} from the jewelry section. I did not have any planned project for them, but knew that I could use them somehow, some way. 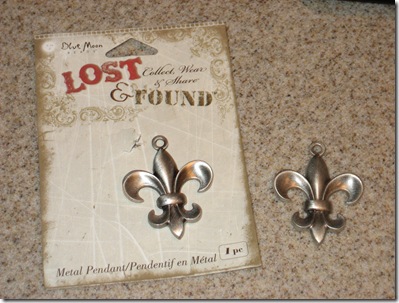 In playing around with laying them out, I found you could do a variety of things with them to dress up a frame. You could do four on an angle in each corner, but since I only had two I decided to put them in the middle top of each frame. 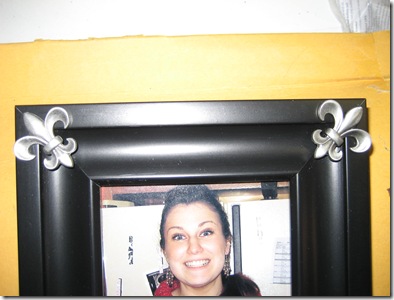 I used pliers to take off the metal ring at the top of each. A little hot glue and they’re done! 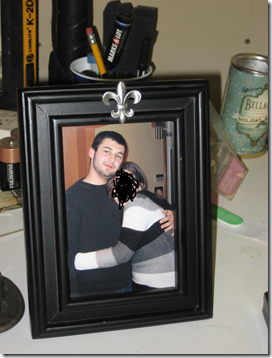 I blocked out my son’s girlfriend’s face in the pictures, not because I don’t like her {I felt like I was doing Sharpie graffiti on her face with the paintbrush tool in Photoshop}, but because she’s not my kid, and I don’t like to put other people’s kids online unless I get permission. She’s a lovely girl and I will enjoy looking at this picture of the two of them. 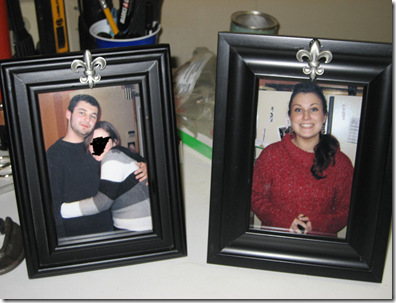 The second picture is my daughter, who was being overly dramatic for the camera. I still think she’s beautiful ~ drama or not! 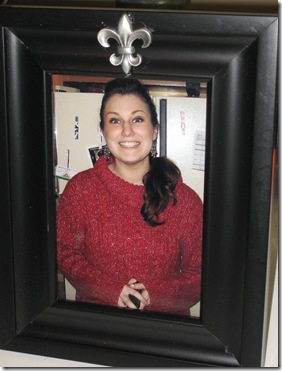 Just another idea for thinking outside of the box in decorating or crafting. Dress up some plain picture frames with things like these jewelry pendants, or brooches, or even earrings.

Very Cute! How funny I recently bought one of those charms, I attached mine to an old rosary chain and have it hanging BUT I think I like the idea of attaching it better, to cute! Hope you had a nice New years Eve!

Neat Idea. It looks great. I enjoyed my visit to your blog. :)

so cute, fleur de lis are one of my favorite motifs!

What a super and creative idea. I love it. Seems so simple but really makes a huge impact. Hugs, Marty

Kathy,
When I first started reading this post I was thinking that you had scratched out the face of an ex-girlfriend ;) LOL! I love those little additions to the frames. They look great!

I think I could do this one. I have only ever been in Michael's once so maybe I can go there again. Happy New Year.

They look great! And so do your kids. I understand the "blob" over your son's girlfiend's face but it still looks funny! Fleur de Lis's make me happy.

I have got to do this! I redecorated my clssroom this year and that is my theme! Here is the link: http://kristi-kikiscorner.blogspot.com/2009/08/my-classroom-makeover.html
Thanks for the fabulous idea. Happy New Year!

N and A look great as always! Nice idea - I have two fleur de lis leftover from another project so I just might steal your look!

Am I allowed to enter your giveaway?

Cool! I love this project. So simple, but a big impact. I've seen those very same fleur de lis jewelry pieces at the craft store. Now I'm going to have to start stocking up on cute ones when I see them.

Thanks for sharing this project. Oh, and your kids are gorgeous. From your profile pic, you don't look old enough to have kids that age! ;o)

Very nice. Gives me an idea for a few frames in our house that I'm thinking of using that had been stored in boxes before. Very nice blog! Thanks for sharing!

I LOVE it! Photo frame jewelry! So easy but makes such an impact.

Thanks for sharing and linking up to SNS!

So cute! They really made a huge difference!

Very cute idea, I love that you protected your sons girlfriend, I feel the same way about putting other people's kids on my blog.

Your blog keeps getting better and better! Your older articles are not as good as newer ones you have a lot more creativity and originality now keep it up!

I congratulate, you were visited with simply brilliant idea

Hi Kathy,
The frames look great. It's fun to see how the addition of a little bling can really change the look of the frame. Cute kids too!!
Jane

Its So Very Cheri said...

I love these and hope you post to my party tonight. Then can you contact Hobby Lobby and find out when they will be getting a HL here in SW FL--
I guess they are tired of hearing from me-no response as of yet.
So glad we will be on the band wagon together.

Very pretty Kathy! I always love fleur di lis. It's the perfect touch to the frame. Your children are beautiful!

I have made your blog my "blog of the week". You have inspired my latest changes and post.

SO simple but really makes a big difference. Great way to dress up a plain frame and I think I might have some of those charms in my sewing room. Thanks for giving me a new way to use them.

Great idea! I like dressing up plain picture frames too, but I usually do it with paint.

I like the frame "jewelry"! Another creative idea. Your son is handsome and your daughter beautiful!

Hi Kathy! Love how you dressed up the frames. I am uncomfortable showing my kids faces on my blog. There are a lot of creepers out there. The only picture showing them facing the camera was on my Christmas post. Even then, I kind of wished I hadn't shown them.