Panels For The Sunroom

I have seen several variations of adding fabric to ready made drapes to get the length you need or even just to customize them more for your home.  I bought this fabric a few months before we moved to fix some panels I had that were falling apart at the top.  Since I don’t have to do that anymore, I decided to use them for stationery panels I want to do for the sunroom. 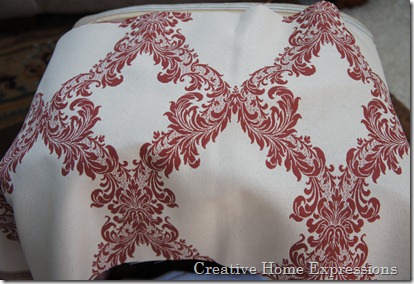 It is double-sided and I chose to go with the cream background and rust pattern {the other side is a rust background and cream pattern}.  I found decent priced panels at Hobby Lobby in a similar cream color.  They are 84 inches long and I need about 92 inches for the sunroom windows.

There are seven windows in this sunroom and that adds up to a lot of money for drapes!  Since they are going to be stationery panels, I slashed down how many panels I actually need ~ eight panels, but I only need to buy four because I’m going to cut them in half lengthwise. 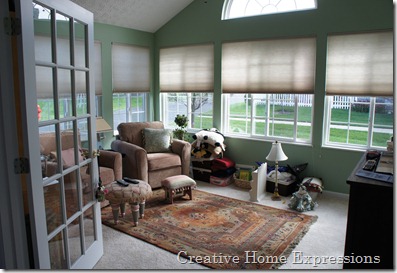 I went neutral, basically, because I am hoping to paint this sunroom from its current green color.  I’m leaning toward Restrained Gold; I liked the way it looked on Becca’s walls.  Since we are waiting until after Christmas I have some time.  I’m going to pull the paint sample from my case and see how it looks with the fabric and all. 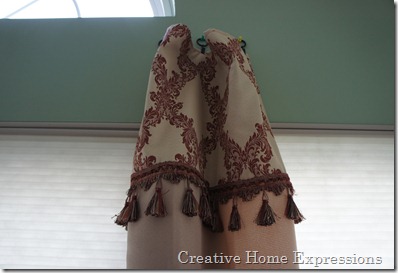 I decided to add my fabric to the top because I want to see it when I am both in the room and when I look into the room.  I figured that while it would look just as nice at the bottom, I’d like seeing it more at the top. 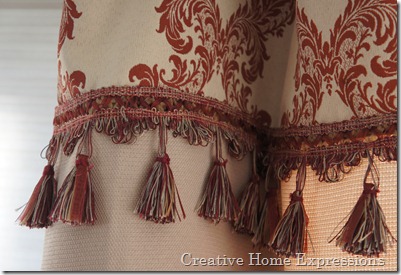 I also found this trim at Hobby Lobby and, while I sewed the fabrics, I used Liquid Stitch to apply the trim.  I applied that to the seam where the fabrics meet. 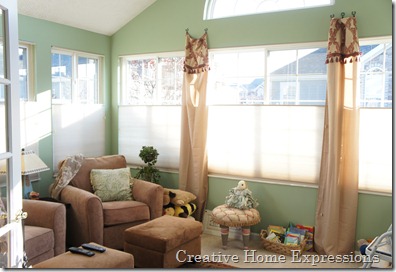 I just tacked these up on the wall with pushpins to get an idea of how they would look.  They will look more like the one to the right side of the picture since I had three drapery rings on that one and only two on the left one. 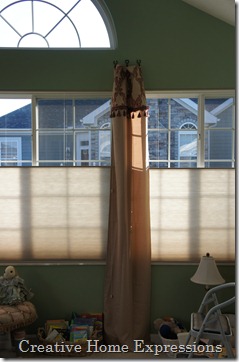 I found some interesting options to use to hook the drapery rings onto, but I want to get the panels done before I get those. Two panels down, six to go!  They are on hold at the moment though, because I need to skip ahead to the guest bedroom drapes.  My son is coming to visit for Thanksgiving!

They look great just the way you have them..

woooooohooooooooo the son is gonna visit. I know that will make your heart sing..

Extending the readymades here was a great option Kathy. Fabrics like your rust and cream are fun because of the options to use both sides in a project. These are turning out very pretty!

They are going to look great!

Great choice, they are going to look awesome !

Love the fabric and the trim. They are going to look amazing. Hugs, Marty

I love the idea of extending the ready made drapes. I have to do the same thing in my daughter's room. We are in the process of updating her room, once again, this time with a full size bed. Well the drapes that were hidden behind the daybed will now become visible and they are about three inches too short. I can't add to the top since they are pinch pleat drapes but I plan on adding to the bottom. I haven't found an awesome trim (wish we had a hobby lobby) so I think I'm going to use a coordinating fabric and pleat it for the bottom. Your drapes are looking beautiful.

Those are beautiful Kathy! Love the fabric on the top! :-)
Vanessa

Kathy, your drapes look gorgeous. Can't wait to see your sunroom after you paint it. Have a great day!!!
hugs~~~ Daphne

I love these...the color and pattern. They are going to look fantastic! The walls in my living room are this shade of green and I am ready for a change, too. Hopefully this spring.

Have a great Thanksgiving with your son home!

I really like how you've dressed these up! I would LOVE to have a sunroom.
Brenda

Those are turning out great! I love the combination of those fabrics and trim. I agree that the patterned part looks best up top. It's going to feel like a whole new room when you're done!

Hi Kathy,
What a great way to save on fabric cost. And, I love the look. The color of the fabric is very pretty. Your room is going to look so pretty.

I love the idea of adding fabric to ready made drapes and especially adding the trim to them! Yours look very pretty!
Blessings,
Janet

I love the panels Kathy and have done similar things, including cutting them in half. I think you made the right choice by adding the printed fabric at the top rather than the bottom. Can't wait to see this come together!

Kathy, they're going to look FABULOUS! Love the fabric you chose. And, I look forward to seeing your new wall color, too, although, the green looks great in there for now. :)

Neat idea to add your own touch to ready made drapes. Looking forward to seeing the finish.