Sometimes you just want a quick and easy project to do.  This is one of them.  I had a cut glass bottle that I had gotten years ago from Pier 1 to hold the dishwashing liquid by our sink.  I used decorative cork toppers to cap it and recently bought a few of those toppers used with syrups or oils, but they didn’t fit this bottle.  I bought a new bottle with topper at Walmart last week to hold the dishwashing liquid. 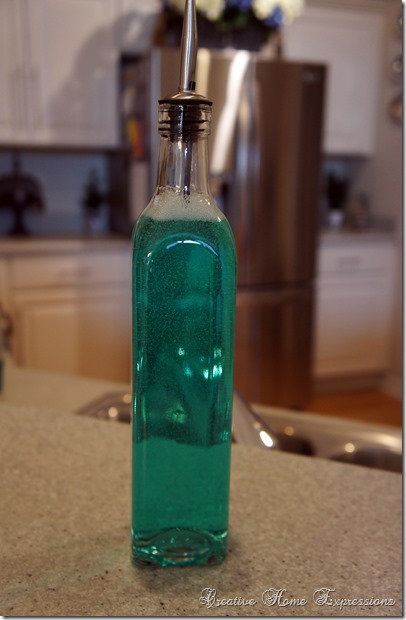 Problem was {in my eyes} it was rather plan looking.  The cut glass bottle on its own had looked so pretty.  I decided to add some rub-ons that I had to the new plain glass bottle.  You should probably do something like this before you put the dishwashing liquid in the bottle. 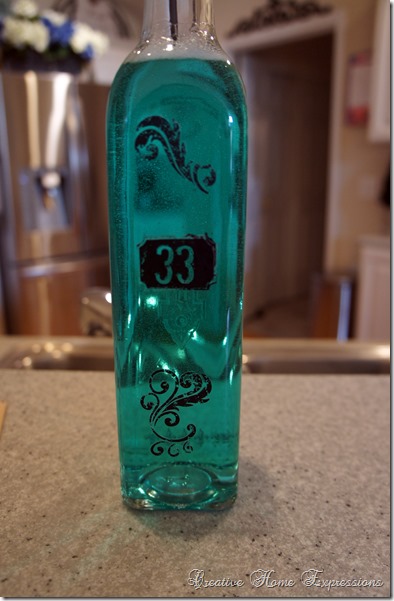 Simple, quick, and easy enough to dress up this plain bottle. 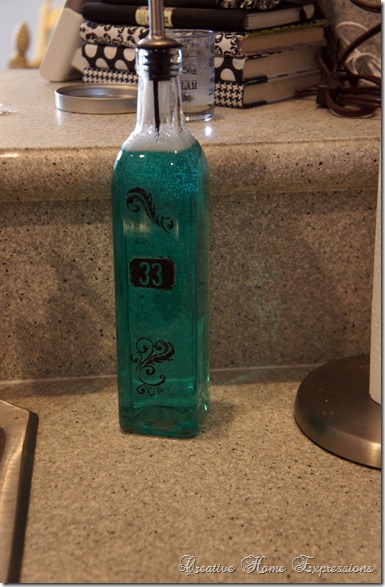 I am still going to be on the look-out for this type of stopper, though, for my cut glass bottle, but this one makes a nice change for now.

What a fun idea. I have a bottle like that that holds my oil for cooking. Great idea with the rub ons. Hugs, Marty

What a great idea and it turned out so nice! Thanks for sharing and stopping by!

Very nice. Sorry I jumped the gun on the booth info.

looks great., you have such a creative mind!!

Hi Kathy, Great idea!! And even the soap color is stylin!! I'm going to pull out my bottle like this. Thanks for sharing.
Have a nice weekend.
Hugs~

great idea! I love anything simple!!~~Angela

What a great idea and solution. Love it, simple and quick with impact!

What a great idea. Looks wonderful.

How cute! Great idea for a quick style upgrade.

Hi Kathy,
Very creative and so cute. Love this.
Kris

And of course you embellished the bottle...beautiful Kathy!!! Have a great weekend!

Very cute and certainly my kind of project!

What a great use for those rub ons! Looks great! Life to the full! Melissa

Really pretty Kathy! I think Cost Plus has some different pourers/toppers. I think I remember seeing some when I was in there a few weeks ago.

Thanks a lot for hosting Kathy. I am a new Follower of your Blog. Have a good week.