I decided to start covering my cones and so I got some things together. Some very high-tech tools here ~ glue gun and glue sticks, scrap card stock, scrapbook papers, ribbons, scissors, coffee filters and two different size flashlights. 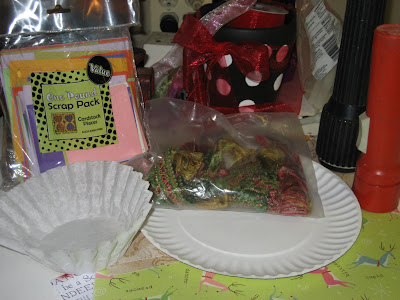 All kinds of trims from my stash. 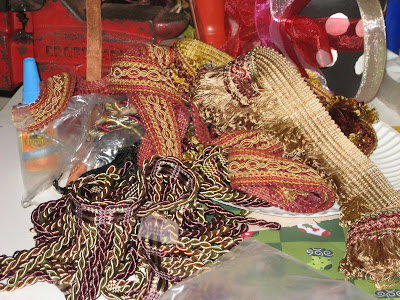 And a paper plate, which I used to get the proper size from the scrapbook paper, that would wrap around the cone. 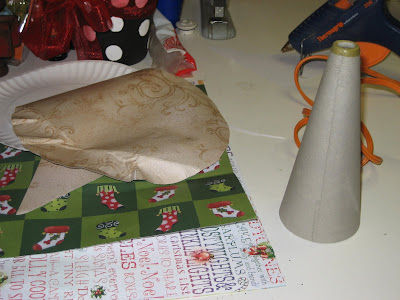 Coffee filters become trim and those circle ruffley things. I've seen them on other people's projects. I love them, but I don't know what they are called, and I don't think I've seen them to purchase at Michael's. So ~ I made my own. I've taken to calling them a "medallion". For the "medallion" portion I just kept scrunching the filter holding it from the back and working it into a smaller circle. I glued it a little bit just so it wouldn't straighten itself out. 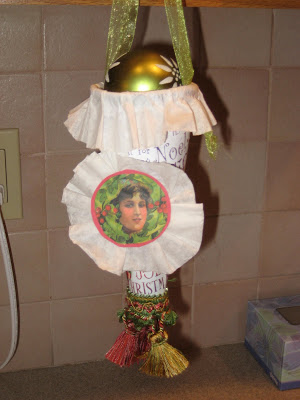 I used a graphic from The Graphics Fairy. Using the larger of the flashlights, I traced a circle on the card stock and used the smaller flashlight to trace out the image. I glued the image to the cardstock and then glued that to the filter "medallion". 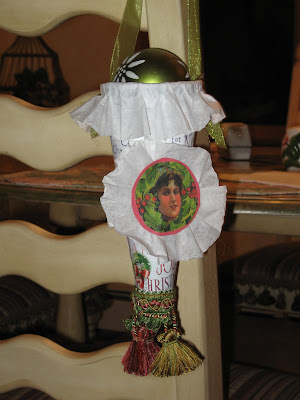 The top part is also a filter. I just put it on top and pushed it inside the cone to where I wanted the "ruffle" to fall. I then glued underneath the outside to secure it. I didn't cut it yet, but you could then cut the inside of the cone where the filter is and either glue it down so it hides that portion of your unfinished cone or cut it out altogether depending on what you put inside.

Here's another using some trims: 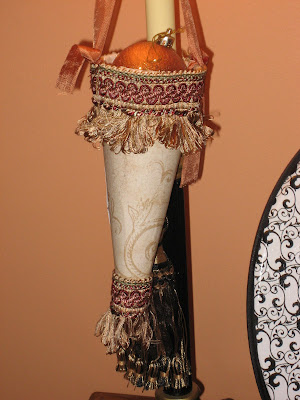 This one is scrapbook paper and trim used at the top and bottom, and ribbon as a hanger. I just stuck an ornament in each one for the pictures. 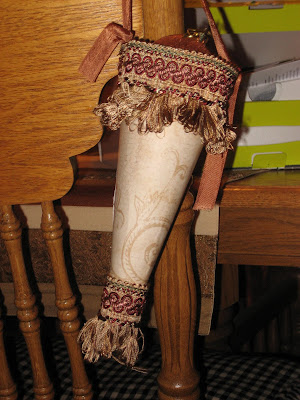 I tea-dyed two coffee filters and I'm going to try using them next. Still have several of these to go!

Hi
Just wanted to let you know that we are hosting a Christmas Cookie Recipe Party every friday the month of December. Stop by and pick up the button and please spread the word. Thanks!

Hi Kathy,
These look terrific! I think these would be fun to make, and look pretty hanging from my door handles. Wishing you a nice Thanksgiving.
Cathy

Very pretty. I really love the last one!!
Happy Thanksgiving!!

Kathy:
These are great. I really like them hanging off the back of the chair. I never do anything with my chairs but these could add a festive touch.
Thanks,
Jane

Thanks for sharing these! I love cones, but just never get around to it--think I just might now after Thanksgiving--thanks for showing how you did it! Love the Graphics Fairy!

I have a friend that makes these too and they are so pretty. I love yours and you make it seem easy. Thanks!

These cones are really cute Kathy! Especially with the trim. Looks like a fun project! I'll bet the tea dyed filters will look nice and even more "vintage".

Those are so cute. To quote Mr. Stitches, "You've gone crafting crazy!" lol

Very cute! Thanks for stopping by and leaving a comment!

I like the way you pulled together all these different elements to come up with this! They turned out pretty - the second is my favorite. :-)

Have a great Thanksgiving!

Kathy~I'm strolling in to catch up and especially to wish you and your loved ones a Happy Thanksgiving!
It's such a wonderful time to stop and reflect on all those we cherish and are truly grateful for.

Even though our Thanksgiving is very small in number, with hubby and son (we don't count the cat cause she doesn't like turkey). We don't scrimp on the menu...from appetizers to desserts! A tryptophan delight,lol!

I love cones! Yours are so vintage chic.