Let me start out by saying that I will most likely not do this again.  Nope. Not again.  I would buy some that other people make, but I won’t be Mod Podging my fingers up again any time soon.   So let me show you the pumpkins in their finished state first. 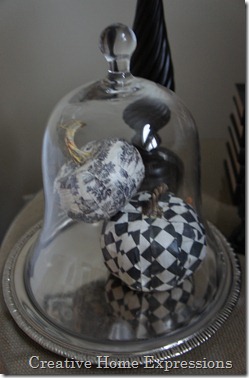 I showed you the pumpkins and paper that I had decided to use.  I figured going small would make it an easier project.  I was very much mistaken.  It did not. 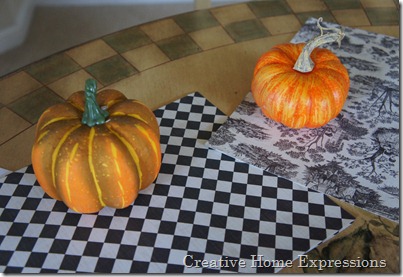 I cut my paper into strips, about an inch wide, and had the length go to about the center of the bottom of the pumpkin.  I put Mod Podge on, then a strip, and continued that way.  Because of the shape, you have to go back and fill in the “gaps” with more strips. 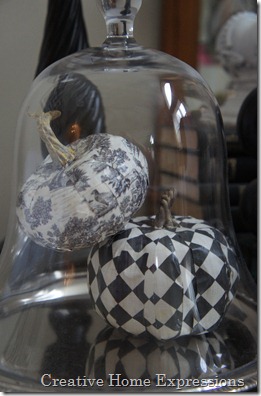 I believe that the Country Living article suggests tearing your toile paper and attaching it that way rather than strips.  And, that may be a  much better idea.  I also think it is a much better idea if you use a larger pumpkin that probably does not have as many grooves to it as these pumpkins. 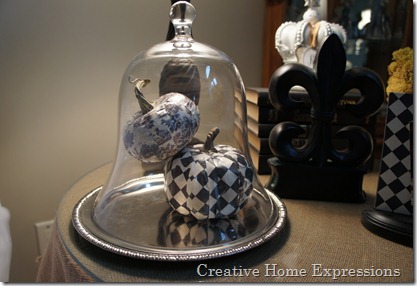 I hope this doesn’t discourage others from trying this out if you had planned to; this is just my experience and it probably would have gone easier with larger pumpkins.  Not every project goes smoothly and I like to share the successes and failures with you.

Don’t forget to check out the current giveaway I have going on ~ a copy of Cabbages and Roses book, At Home With Country.  Click here to enter.

I have only used Mod Podge once and I hated it!! So funny to read this..but they look cute!

Susan (Between Naps On The Porch.net) said...

Kathy, You did great! You did pick a harder style pumpkin with the deeper groves. My hats off to you! That wasn't an easy pumpkin to cover. I love the patterns you chose! Sooo cute! They are wonderful together!

Kathy they look fabulous, I LOVE the ck and the toile together!! I have some Mod Podge left, I think that's going to be my project today:) Enjoy your weekend, Martina

They look great, Kathy!!! I bought some paper covered pumpkins at one of the flea events I went to and Tricia had told me that they were time consuming to make (I figured they would be) so I wasn't going to attempt it, LOL

They turned out great! Another blog friend of mine, decided to use actually toile fabric cut into strips because it was more flexible than paper and she said it was easy that way.

They look great though! I am sure you are still getting the modge podge out from under your fingernails....benn there...done that!

Love them under the cloche!

So cute! I love them! I just bought some Mod Podge I'm going to try this! They are adorable!

The pain in the biscuits project sure turned out cute!!!

sorry it gave ya such a fit Kathy.. your display looks great though..

They look just adorable Kathy but I hear you on the mod podge frustration! :-) I think you were right that a bigger pumpkin might actually have been easier but they really do look darling.
Vanessa

They look fabulous. Mod podge is fun, but oh it can be really tricky. YOurs turned out great even if it was a lot of work and of course under the cloche makes them magnificent. Hugs, Marty

Adore your honesty and they really do look great. Maybe you will feel differently next year when you pull them out again. :0
PK

They turned out really cute! I mod podged some pumpkins a couple of weeks age, but they were bigger and pretty easy. You're right, I think the small size definitely would make things tedious!

Hi Kathy, They look beautiful! But, if you now have to go for a manicure you might be right...best to buy them next time. I haven't tried it yet. I'm actually ready to start doing Cristmas stuff. Maybe I'll try that on a Christmas ornament instead.

Awwww they're so cute Kathy! They look adorable under your cloche.

Seems like all your hard work paid off in the lovely display you made with them.

I really want to try this project. I'm running out of time before I'm past the season. I think yours turned out great.

Let me just tell you, your mod podged fingers created some classy little pumpkins! If I were you, I'd be inclined to leave these little gems out year round.

Well, hard or not, these turned out beautifully, Kathy!! Thanks for sharing.

Kathy, Your photo gallery has turned out so lovely. I can't begin to tell you how many of your ideas will be finding their way into my daughter's home. You have made the most difficult decorating ideas doable for anyone. This truly is your special talent. Thanks for all that you share! Elizabeth

Your pumpkins turned out beautiful! I still haven't tried it, but I still have some mackenzie childs tissue paper, I also have some coach tissue paper from when I bought a new purse last weekend. I was thinking it would be cute to mod podge one for my bathroom upstairs LOL
Have a Happy Halloween!