In my continuing effort to create with what I already have on hand, I found this wood block that had the word “Home” on it.  I forgot to take a before picture, but it was a light green color and has a hole in the top for something that was stuck in there at one time and is now lost. 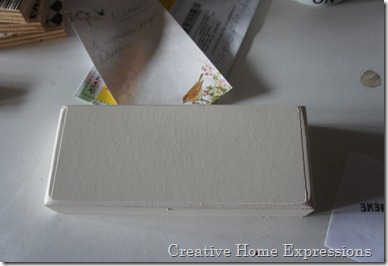 The green and the design on the lettering didn’t really work for me so I sprayed it Heirloom White and wanted to try adding a different phrase to it.  I searched through my images from The Graphics Fairy to see what I could come up with.  This one was already provided in mirror image by Karen. 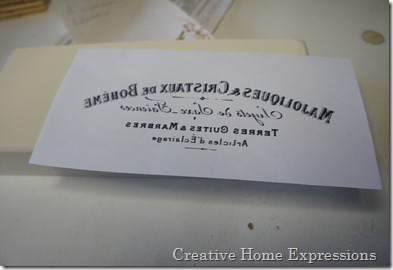 I decided to try the transfer technique of putting glue or Mod Podge on the image, letting it dry and then dampening the paper to remove it, leaving the image behind.  I printed this out on a laser jet printer, which may be a mistake as the black ink changed to a teal or blue/green shade by the time I was done.

I thought it looked like a giant bar of soap so I put it in my bathroom {which the ink color actually matches pretty well}. 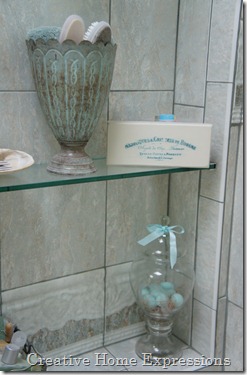 I’m not sure what I did wrong; it may have been the printer I used, but I will keep trying.  For now, it will sit here on the shelf in my bathroom. 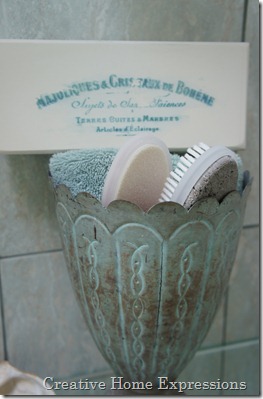 My UPrinting.com giveaway for a rolled canvas print is going on until August 3, 2011!

Hi Kathy,
I have a time with transfering images. I'm just not good at it and I always end up wasting that expensive transfer paper! LOL!

Wow - that is crazy! I want to try this technique, but I have a laser printer, too. Is that the problem?? laser versus injet? Linda

I have never tried that method....It does look like a bar of soap!
Penny

I love it Kathy! I am all about recycle, reuse and repurpose!

It looks great in there! I can't get over how drastically the color changed! Good to know!

I love this! It is so pretty! What a great idea.
I want to try this soon. Thanks for sharing such a great idea!

I haven't tried that transfer method yet. But I recently bought some modpodge to give it a try. Your's looks really nice.

LOVE it!! I don't have very good results with Mod Podge, so I always appreciate the successes of others (lol).

Well that looks like a very BEAUTIFUL mistake...and it looks as thought it was meant for that bathroom shelf of yours....

Well, regardless, I love the way it turned out!!

Inspired by you said...

I like the ink color change. I want to try this out but I've got to get my printer taken apart to unjam it. Glad you liked my paper roses!

Love it, Kathy ... a happy mistake if you ask me! I've never tried that before either. However, I've spied a few graphics from Graphics Fairy, and I'm tempted to try the pencil transfer method on my stools. We'll see.

The transfer came out great! Don't you love how something simple can change things! And yes girl. Get in an outdoor shower!!

Hi Kathy,
I have used this technique on 4" x 4" tumbled marble tiles for coasters and it's a fun way to transfer images.
I'm not sure why it changed color on you. You were correct to use a laser printer as the ink has toner in it and this type of transfer needs toner. (So this works well with copies from a copy machine). Copies from an ink jet printer won't work.
I think your project turned out great. The color change did work well in your bathroom!
Jane

that looks adorable on your shelf.
you are so creative and always doing fun stuff..

hi Kathy, I've never tried this but it looks like fun and something I would like to try. I like your creativity with the wood block, it does look like a bar of soap and perfect for the bath. I love the color and its a perfect match.

Kathy honey I like how this looks in your bathroom.
You have the best ways to decorate and sharing with us how you did it was really sweet.
Who knows now with extra time on my hands these days I might get brave like you and try this myself. lol
Thanks honey for always encouraging me with your sweet comments. I so appreciate them and you
Love
Maggie

I could learn so much from you. What great results. I love the final picture!

Hi Kathy! I Love it! I read this week about the technique but I don't remember the wet paper towel part. It doesn't matter though it turned out great!! Are you packing yet??

Huggs, Nancy
Oh darn I still have to draw a winner!

The color of the ink did turn out perfect for your accessories. I still have to give this method a try. This just looks like such fun. Hugs, Marty

I was doing the same thing at midnight last night. I was using a different medium-on to fabric. Mine didn't turn out so great!
Someone will have to work really hard to work up a lather with your project!
Rhonda

It does look like a bar of soap. I had luck transferring something from using tissue paper. Maybe this would work for you in the future.
http://the2seasons.com/2011/03/15/monogrammed-coasters/

I like it a lot! It does remind me of a bar of soap.
Very cool that the transfer changed color!!!

Sometimes our "mistakes" turn out to be our favorites! I love it!

I like how it turned out! I thought you had to use a laser printer? That's been my problem - I only have an inkjet one.

Loved your reuse of the wood block. I have tried this technique as well, and it works better when I get a copy made at Staples instead of my home printer. The ink on my HP has the irritating habit of smearing when any moisture is in contact with it.