I just wanted to share a tip that my lovely slipcover lady, Elisa, showed me when she did my living room couch.  When she was putting the seat cushions into their covers, she wrapped some batting around the cushions first. This made them firmer and look a little higher sitting on the couch.  This picture was taken shortly after the slipcover was done. 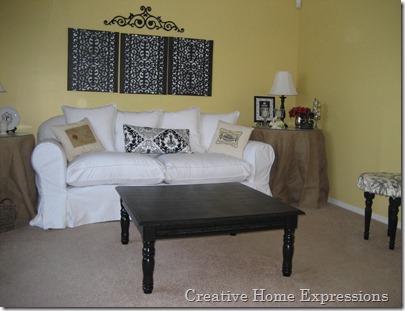 Oddly enough, this couch didn’t really need the “lift”, but my den couch did!  That couch was where I recuperated for two weeks each time, for the two times I had to have surgery {no stair climbing}, and where my daughter stayed after she had her baby {C-section, no stair climbing}.  It was always a very comfortable couch, nappable {spellcheck is telling me that’s not a word, but it should be!}.  Here is the chair cushion to show you what the couch cushions looked like pre-batting. 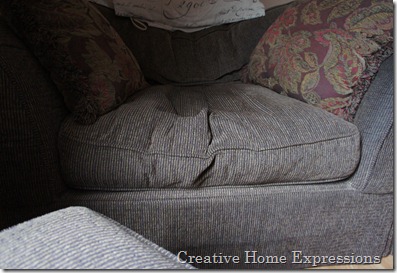 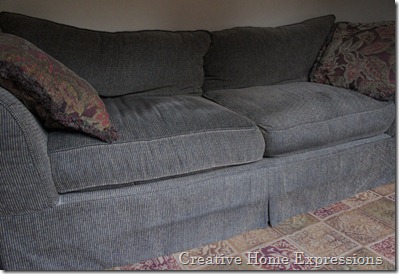 It was a visual difference right away and a physical difference as soon as you sat down on them.  Almost as good as new!

So if you find your chair or couch cushions could use a “butt lift” get some batting from the fabric store {not the packaged stuff but off the bolt} and just get enough to go around the top and bottom of the cushion.   Your butt will thank you!

Posted by Kathy @ Creative Home Expressions at 6:58 AM

Great tip, Kathy! I've been admiring all your new frames and artwork you've been creating. Honestly, not only will the condo be new to you but everything you put in it will seem brand new too! I'm so impressed that in the midst of all the packing you're making time to be creative as well!

This is a great tip! I had an upholsterer do one for me once! Crazy me! I so appreciate this tip, now I know what to do! I agree with Sonya; I am so impressed that you are still doing projects and blogging while packing! I am enjoying them! Thanks!

Hi Kathy,
Thanks for the great tip. I do have a sofa that needs a little butt lift! I'm going to give this a try.
Jane

I'm getting ready to put a new slipcover on a chair I have and I love the batting idea! Thanks! I've enjoyed looking over the past posts and seeing all your creative projects...love the headboard! Your new place will be lovely..

It really does make a difference doesnt it. it does look like a comfortable sofa too. hope you are now fully recovered from your operations. I love the new slipcover on your other sofa too.

Great idea. I am so going to do this. With three kids in college, new furniture is not in our near future. Thanks for the tip.

You're so silly! Don't you use Spanx, or something :)? Seriously, great tip, I didn't realize, or overlooked, batting on a bolt. Thanks for the tip.

That's a great tip! I used to have a sofa that could have used this kind of help! Love your sofa and nice big coffee table! ♥

Great tip! I certainly could use a butt lift for a few chairs, as well as my bootay! LOL