Living Room Drapes And Then Some

Before my previous drapery post even posted, my new drapes from Ballard Designs arrived.  I can’t believe how quick that was and then I found out from a fellow blogger {also named Kathleen, from Décor Amore, and also living in Ohio} that I have a Ballard outlet about half an hour away from me!  Checking the return address on the box, sure enough, it shipped from the Ballard’s in Ohio! 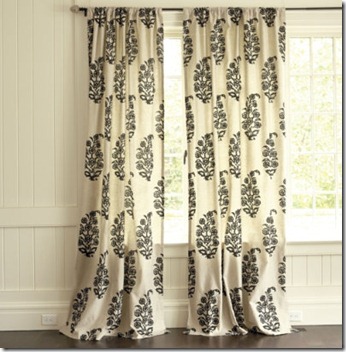 The picture on the website leads you to believe that these are black and white, but luckily I read the reviews.  Not only was it a plus that everyone loved them, but that they mentioned that the “white” is actually a linen color {actually looks like the Osnaberg fabric I used on my stenciled stool that you can just see in the picture below}.  Here is the “before” with no drapes yet. I think they work better in my living room than if it had been white.  Here’s the after. 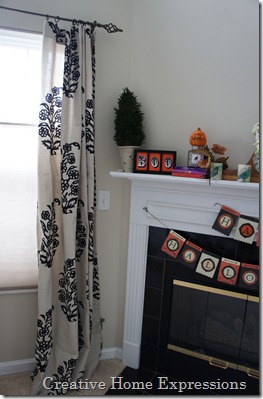 If I choose to close them over at night. 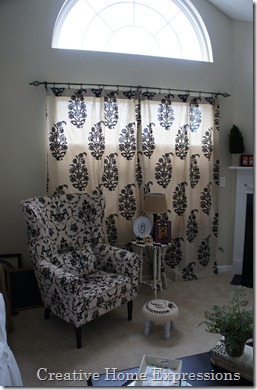 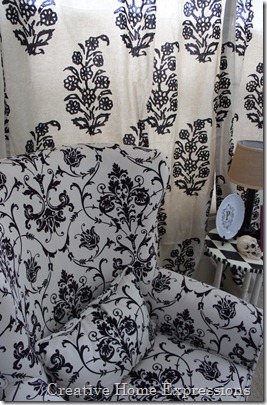 I have moved this furniture around three times already.  Hubby actually said he liked the way the living room was set up and didn’t want to ruin it by having the television in here!  As of last weekend, the television is now in the sunroom.  That prompted a trip to the store to get a television stand and two chairs.  I also had to move the one bookcase over to the other wall next to the second.  It looks fine there and, even though I wasn’t expecting to use the sunroom as a TV room, it works. 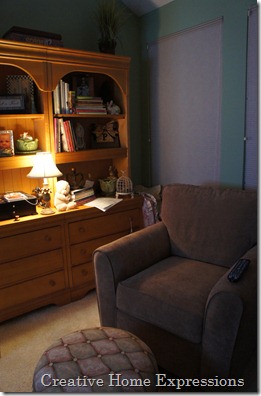 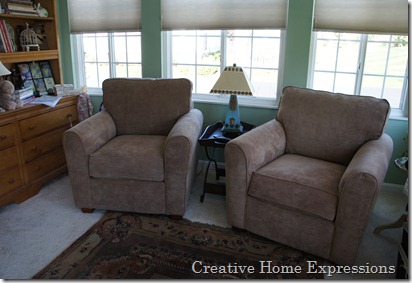 Very soft and comfortable.  I knew they passed the test when I saw hubby falling asleep in his the night we brought them home, while watching the football game. 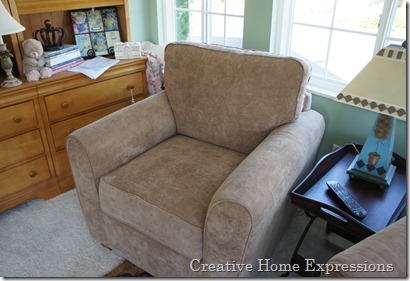 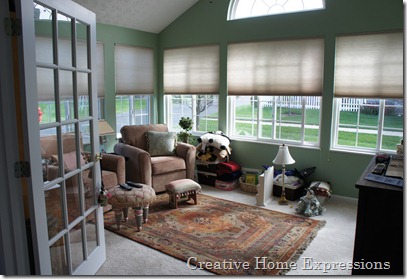 I found ottomans to go with them on the World Market website; $40.00 {each} for the ottoman and $39.00 for the slipcover.   They have a variety of slipcover colors. 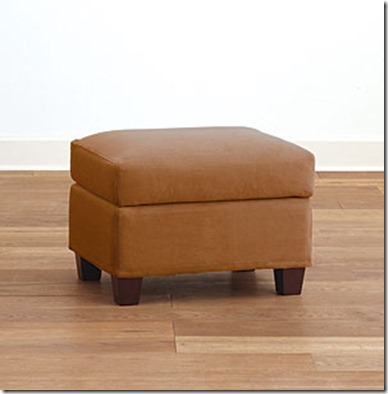 Even when I think I’m done with a room, apparently, I’m not!  I have an idea for drapes in here that will require me to modify some I already have that are too short.

It's looking so good! LOVE the drapes and using the sunroom for a tv room is a great idea! All that light and those windows! I love it! The chairs are perfect!!

You probably have all kinds of wonderful shops near you that you will begin to discover!

Are we ever really "done" with a room? I love both rooms! I especially love all the windows in the sunroom.
We have a Ballard over in Tampa (about a 30 minute drive). Wish it was an outlet. Whenever I order from them, it comes from Ohio, too. Love Ballard. Your chairs are great and look very comfy.
Fran

I remember you telling me about the drapes. They look stunning in your living room.
The chairs do look comfy.

We watch our TV in our sunroom too!

It's looking great. How much fun to buy all of this new stuff. I love the chairs. They look very comfy. I love that you went neutral with the chairs so that you can change things up with pillows if you want. Love the new drapes.

Love the drapes. They look perfect in there. And those chairs do look super comfy!

Hi Kathy,
Those drapes are so pretty and look perfect with your furniture and on that big window.

I know you'll love your lazboy chairs. My sister owns two Lazboy Furniture stores, one in Charleston, WV and the other in Barboursville, WV. So, I have a few pieces myself. Can't go wrong with their stuff.

Love the ottomans too. You are really pulling it together. But, of course I'm not surprised!

Kathy, Your new drapes look wonderful and I like the new chairs and ottomans! How lucky you have a Ballard outlet so close. When we lived in Atlanta I was a regular at their two outlets. Everything is coming together beautifully.
Hugs,
Sherry

Your are really on top of things putting your new place together!! The draperies are very pretty and look wonderful in your space. The sunroom looks very inviting too!
Jane

Kathy, your new drapes look fabulous! I also love the sunroom and your new chairs! It is coming together beautifully! You have been so busy!

The drapes are perfect for your decor and I love your furniture arrangement! We had a recliner like your and even I fell asleep in it! Love them and the ottomans. Everything is shaping up, Kathy!! :-)

Kathy - I love your new curtains! It takes a while to feel at home when you move into a new place and you are doing a great job!

The drapery panels look better in your home than the site picture.
The sunroom sounds the perfect place for comfy chairs & the TV. It's such a pretty space.

Hi Kathy, your new drapes looks wonderful and I love your new chairs with the ottomans. You're just moving along with your new place and it's all looking fabulous!

Have a wonderful day,
Gail

I like the pattern on the Ballard draperies, it carries over well in such a large room. I didn't realize how many windows you have in the sunroom~I would be in there all the time!

Oh I am soooo jealous!! I have been lusting after those drapes since I first saw them but I don't know if I have a place for them. Your window looks so good maybe I need to find a place, bite the bullet and just buy them.

You have two thumbs up from this envious blogging buddy!!

Are you in southwest Ohio? The Ballard outlet is 30 min. south of me- I'm in a south Dayton suburb. Looks as if you're getting settled in. Welcome to the Buckeye state! ~ Sue

The Rooster and The Hen said...