I very rarely do fashion posts, but before you run away, I think you could take the idea from this sewing project and use it in your home décor projects in some way.  I’ve wanted a ruffled jean skirt for awhile now and haven’t been able to find one.  This fashion refashion started with three skirts from Goodwill.  One short jean skirt, a coral colored floral with two ruffles, and a solid black with one ruffle. 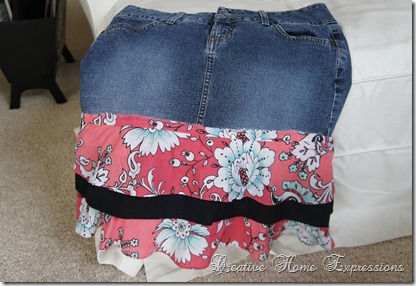 I cut the ruffles off the two skirts, leaving a little extra fabric for attaching to the jean skirt.  I layered each on, starting with the longest ruffle, then did the middle, then the shorter top ruffle.  I just did basic sewing for the first two ruffles and then on the top and final ruffle I did a decorative stitch. 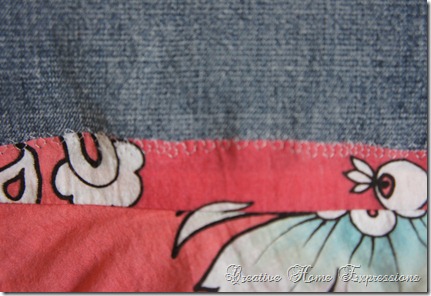 I found this one on my sewing machine and I thought it finished the top off nicely.  It is the one to the far left {looks like a black background}. 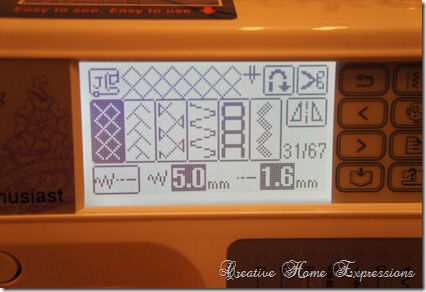 Of course, I had to try it on and model it for you!  We don’t have a full length mirror here, so I had to ask hubby to take these shots for me.   I would not wear this top with this skirt.  I just changed into the skirt quick for these pictures. 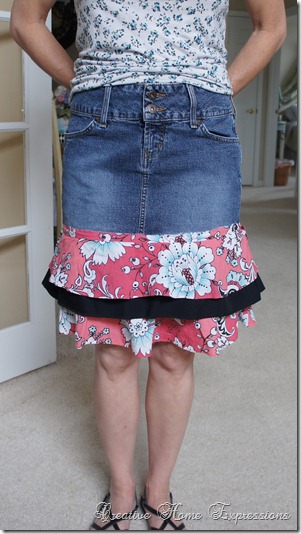 Such a great little skirt now!  The jean skirt before the ruffles hit about mid-thigh.  A little more leg than I want to show at 48, so the ruffles gave me the added length, as well as the cuteness. 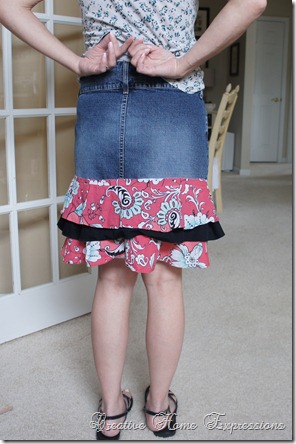 So now, think towels, tablecloths, runners, footstools, etc.   You could make so many things with ruffles from clothing, whether it’s something you already own that is ready to be gotten rid of or something from the thrift store.   For less than $5.00 I got a ruffled jean skirt!

Inspiration Friday At The Picket Fence

How cute Kathy. Looks great on you too.

You are so clever and frugal!

Just look at that cute skirt!

Is that you modeling it, too?

Look at you jumping into the world of fashion!! The skirt looks great on you.

Hi Kathy,
Great job on the skirt!! It is very cute and just perfect for a fun summer outfit. I guess I should be looking at the clothes at the thrift stores now too!
Jane

I did something similiar to this on the skirt I had on my other mannequin, only mine was a long white skirt attached to a jean skirt.

Oh how cute! I love the print! I can't believe all this started from three skirts from the GW:)I admire your sewing skills!I like how you modeled in it:)Thanks for sharing with us and for your lovely comment on my garden party. I like the idea of using LED voitves, I think I'm going to buy some for next time. Have a wonderful week!~Poppy

It looks adorable and you look adorable in it. Great idea. Hugs, Marty

This skirt is so cute and flirty. I love that you were able to transform three discarded items into one that was fabulous.

Cute skirt! You look great in it!

Really cute! And look at those sexy legs. =) I'd love to see more fashion DIY pieces on everyone's blogs - I think it's fun and one of my favorite categories on Pinterest.

How cute is that skirt? 48 is great and you have great legs btw.

I love this skirt! With your legs Kathy, you could go shorter, but this is very lady like! And you are one super lady! Such fun! E