At the end of last year, like many other bloggers, I did posts on my projects for 2011 and what I hoped to accomplish for 2012.  Now that we are just about at the half way mark, I thought I’d take a look and see where I am at on that list.  I mentioned that I wanted to paint the French dresser I found on Craig’s List for our master bedroom. 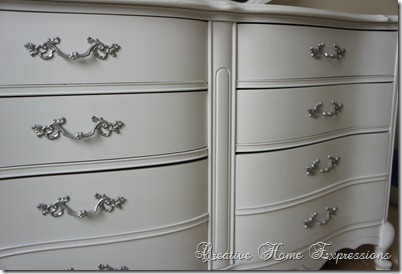 I can check that one off!  Edited to add: the paint on this dresser is Annie Sloan Chalk Paint in Duck Egg. 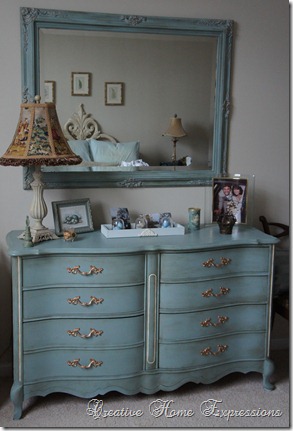 I also mentioned the guest bedroom side tables, which I just finished recently.  Add another tick. 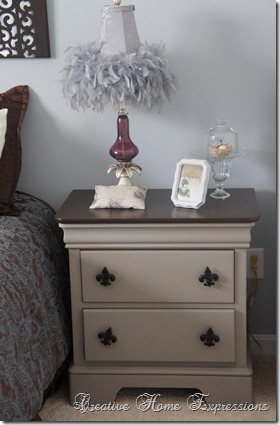 The bathroom wall got its stencil.  That’s three down! 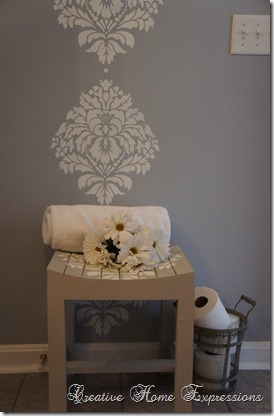 The sunroom has been painted and went from green to SW Interactive Cream. 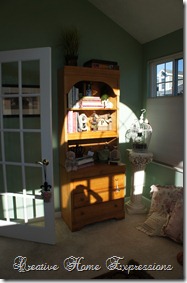 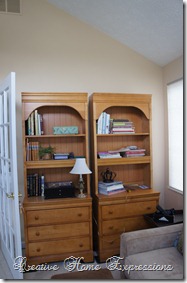 I did get an upholstered chair in our master bedroom, by default really, because we bought a new small sectional for the sunroom and one of the chairs we originally bought for in there went in the master.  Nothing special, but at some point down the road I may get a slipcover made for it. 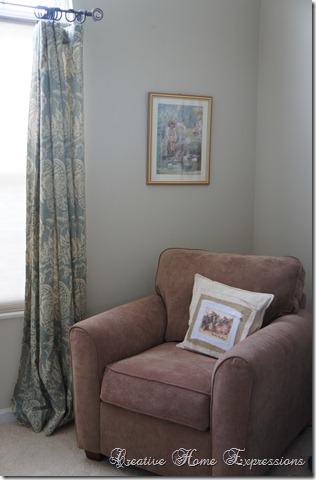 Edited: Maggie reminded me that my laundry room was on that list, too.  Thank you, Maggie! don’t know how I forgot that since it was the most recent. 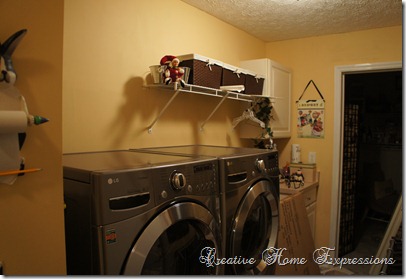 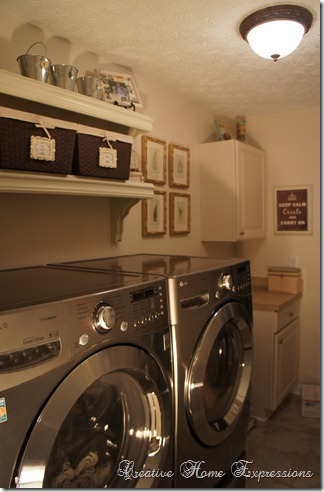 I still need to frame out the mirror in the bathroom and keep a lookout for a nice chair for the guest bedroom.  I’ve decided to hold off on doing anything in the entry area.  I had been thinking stencil, but now I’m not sure I want to do that.  So, I really only have two things left on my goal list!  How are you doing?

You're doing great on your list. I have to check out my list to see how I've done so far. Have a great weekend.

wow-You got a LOT done. I know you probably have it posted somewhere but can you share the color of paint you used on that dresser? It is just wonderful! xo Diana

Wow! You have a accomplished a lot so far this year. Love your painted bedroom dresser.

I love your dresser you painted and all of your projects are fabulous. I am working on the garage and then the rest is the yard, so doing ok. Hugs, marty

Have a fabulous weekend!

Wow, you have been busy and you redid your laundry room too if I recall correctly. Your French dresser turned out stunning.

I try not to make lists because I almost never get to anything on them. You got a lot done this year!

Hi Kathy, I love the way you set goals and then set out to accomplish them. I'm so terrible at that as I seem to flit from one thing to the next. I get things done but in a very lackadaisical way! Lol. I love that dresser. Just beautiful. TFS. Pegy

Every time I cross things off my "to do" list, several more things seem to jump on it! I may never be done at this rate! You look like you've managed to get quit a bit done. Good on ya!

Hey Kathy~
I think you are moving all along quite well! And this was after a major move, too. I wish I had made a list and checked things off. It would make me feel so much better to actually see how much I've gotten done this year, instead of seeing all that needs to be done.

That little desk and chair are really wonderful redone. Bet it will get a lot of happy use.

Wow - you have been busy! Love the painted furniture. I am thinking of painting the pieces on each side of our bed.....your look has inspired me. Oh, glad you got that little French grammar book. I even found an old note that I had written in my high school French book. It was hilarious. I evidently wrote it to a friend - half in English and half in French. She responded the same way....so funny.....so many years ago! Linda

Nice work with the "to-do" list! I love the blue dresser! I am about to paint all of the furniture in my master bedroom. It is hand-me-down furniture from my grandmother. Very similar style. I love that blue! I am still trying to decide what color to paint mine?

I forgot to tell you that I am your newest follower!

Gosh, you've made some great progress. I have a "to do" list that mostly involves hiring outside people and lots of money. So, mine is slow to show progress. Ha!

Kathy, Your doing a great job on that to-do list. I love that dresser. Thank for the inspiration to start a to-do list of my own.

Your updates are beautiful!

I need to make a list too. You have inspired me.

Hi Kathy, you have been a busy bee haven't you? It's great that you have accomplished so much of what you wanted to do. I seem to stay so far behind that I have a very long list of to do jobs. The dresser and mirror that you painted are very pretty. Love the color. If you get a chance come to my Grill, BBQ and Picnic Party starting Sun. at 5pm. Have a great weekend!! -------- Shannon

Wow, you sure have gotten alot accomplished! I am in love with your gorgeous French Provencal dresser! Love, love, love that beautiful color!!

You have accomplished and amazing amount of projects! Wow! They all look lovely! Your attention to detail in your projects shines through!

You are certainly on a roll Kathy! Can you come and help me now!?;)

Well you certainly have gotten a lot accomplished so far. It just occurred to me that this is the halfway mark of the year! I'd better get busy.

Wow! You really have done on a lot on your list already! The laundry room looks amazing.And all those painted pieces you did....you have done such a great job with them! Angie xo