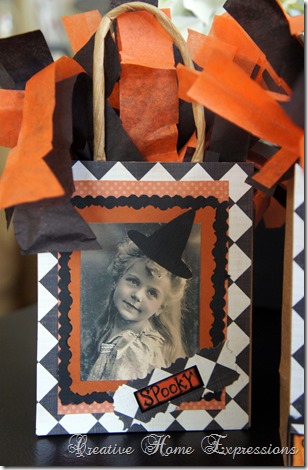 I thought I’d share some Halloween treat bags I made up this year in plenty of time for you to make some of your own.  This is an idea I got from Somerset Holidays and Celebrations magazine {2009}.  Here are the supplies I picked up to do this project: 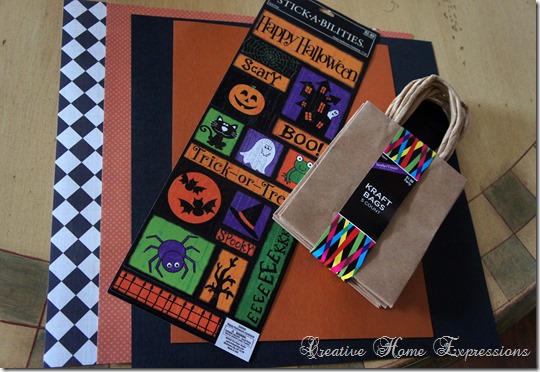 I chose a subdued/faded looking orange color and black & white harlequin pattern scrapbook paper to layer onto the front of my bag.  I will also use them on the back just to give it a finished look.  I also did a couple with some vintage black and white children’s pictures; I’ll use these as decorations. 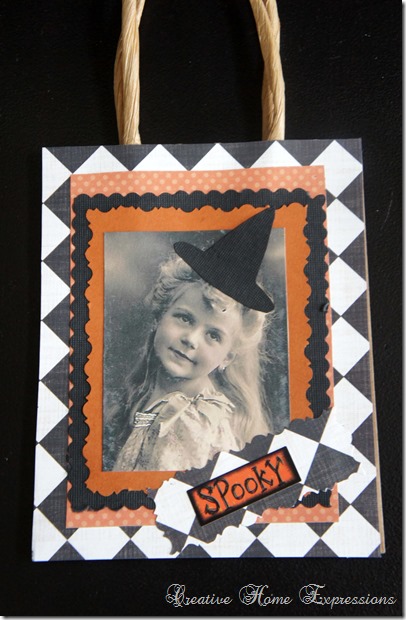 It is very easy and quick to do these, and they will be sure to bring a smile.  They are kind of a trick and a treat all in one!  Once they are finished, you can fill them with some shred in colors to match your scrapbook papers and then add some candy in. 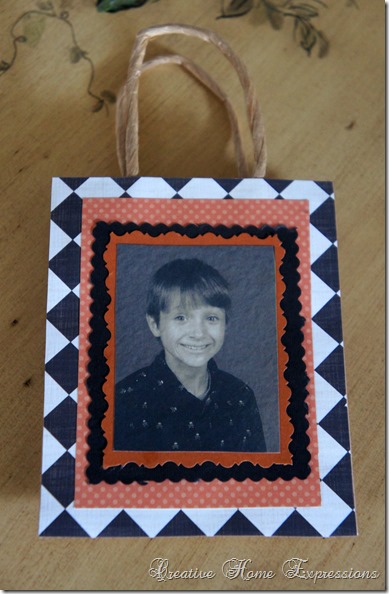 In the case of the bags I made for my nephews, I took a picture of their school pictures {perfect head shots for this type of project}, and edited them to be black and white.  I did the same with a picture I had of my granddaughter; I tried to take a head shot the same as a school picture would be for hers. 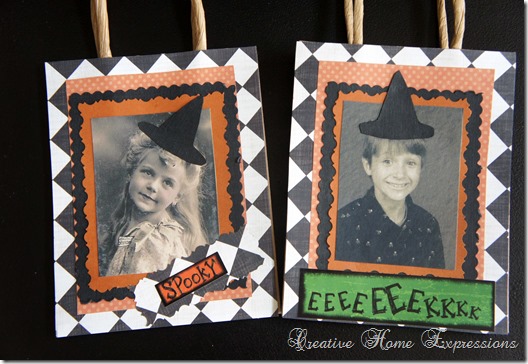 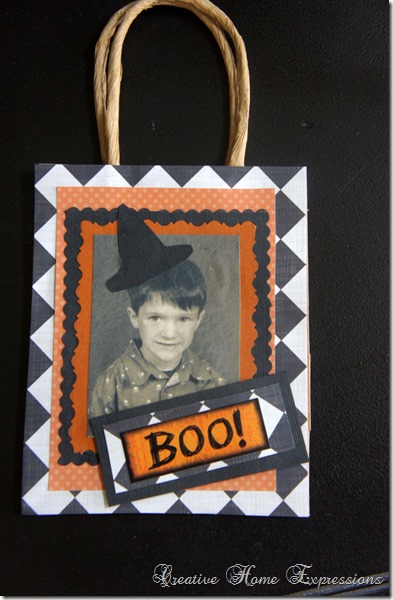 I then cut out some witch hats from the black cardstock.  You can embellish them with glitter, scrapbook paper or ribbon; I basically left them as is.  Glue them onto the picture. 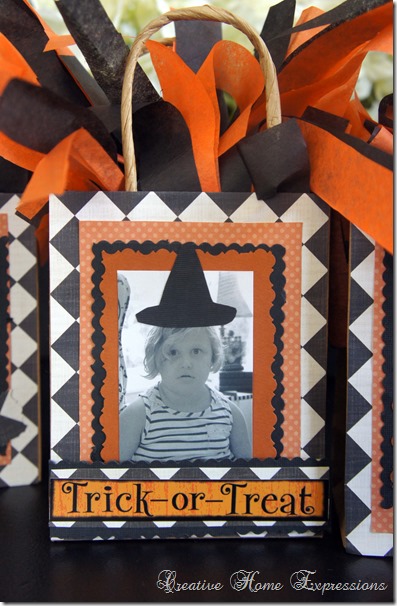 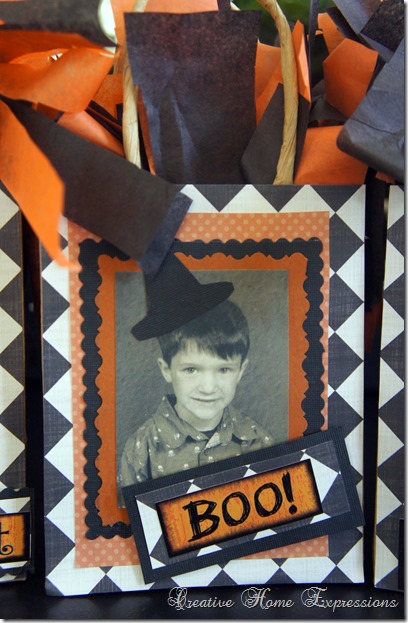 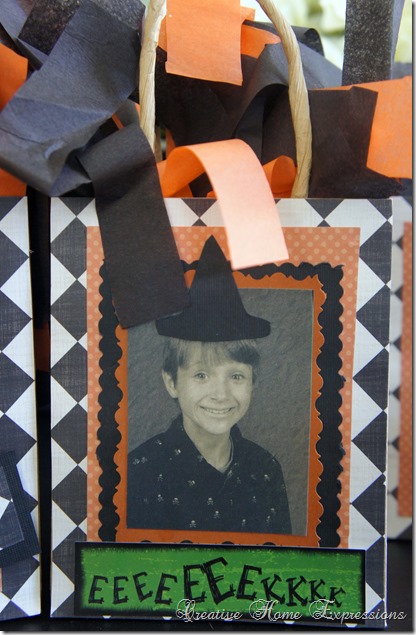 Once that is all set and good to go, glue the cardstock {with the picture wearing its witch hat} to the bag, which should already be decorated in the scrapbook papers you chose.  You can see I double layered these, too. 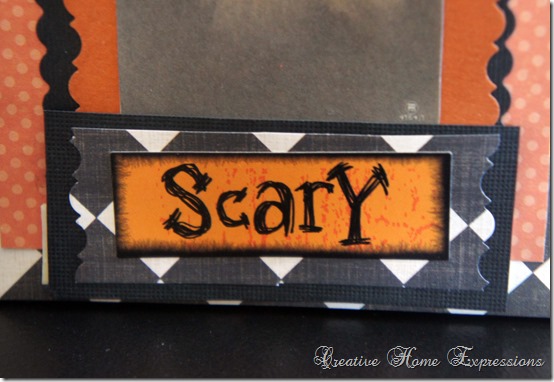 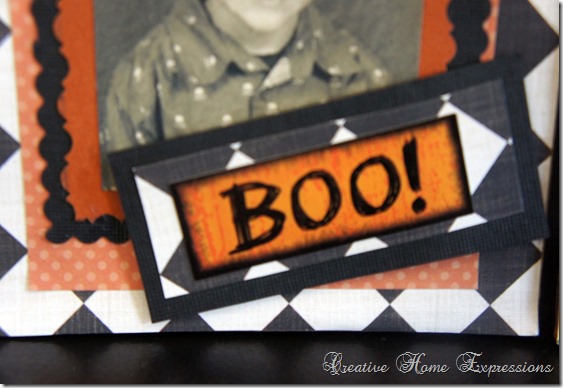 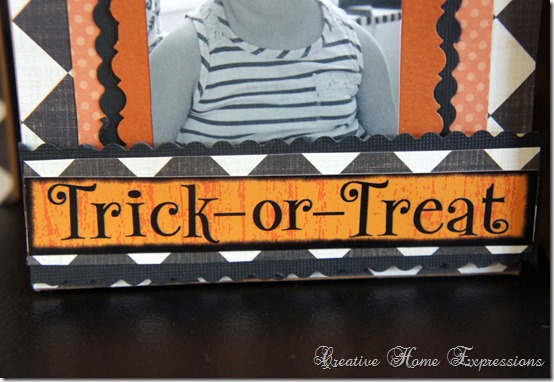 I used a Halloween sticker pack I found that included text and images.  I used the text on the front of the bags, also giving them a bit more dimension by sticking them onto scrapbook paper and then cardstock.  In addition, {on some of them, because I forgot I had it} I added a strip that raises them up off the project a bit. 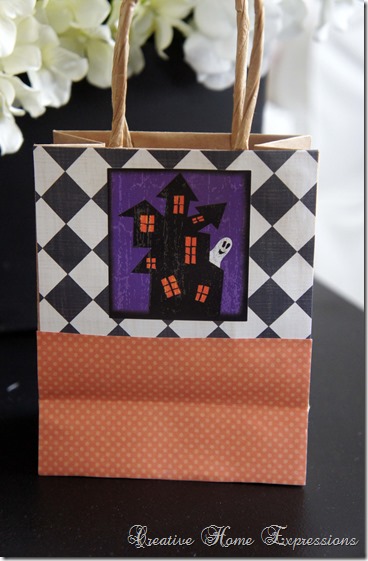 You can use up the scraps of the scrapbook papers for the back.  I also added a Halloween sticker to the back. 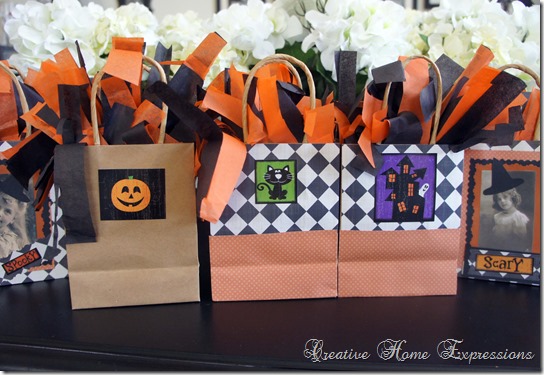 To do the shred inside the bags ~ I couldn’t find a prepackaged orange and black shred, so I bought black and orange tissue paper.  I put one sheet of each color together, then folded over, and cut strips into them – not cutting all the way to the end.  Kind of like making pom-poms.  I took some pictures to illustrate. 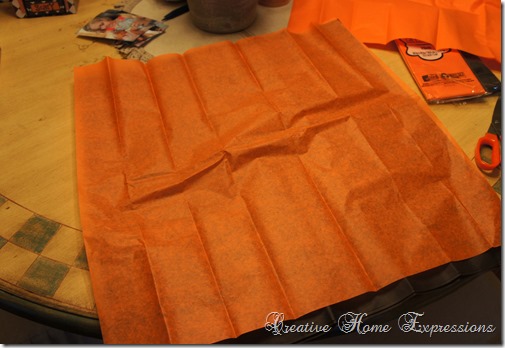 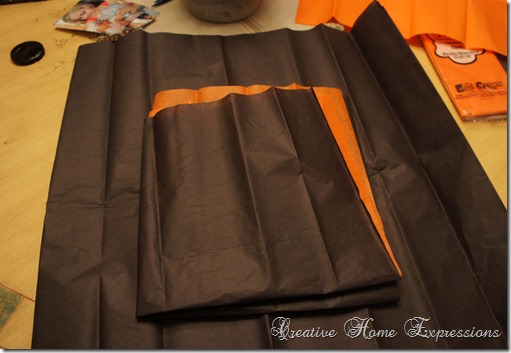 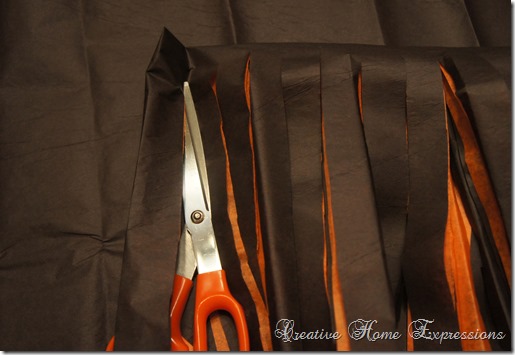 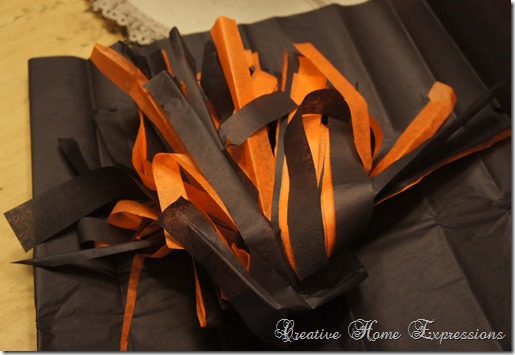 That’s it ~ they’re done!  Then add your treats.  I put some candy and some small, inexpensive toys in mine. 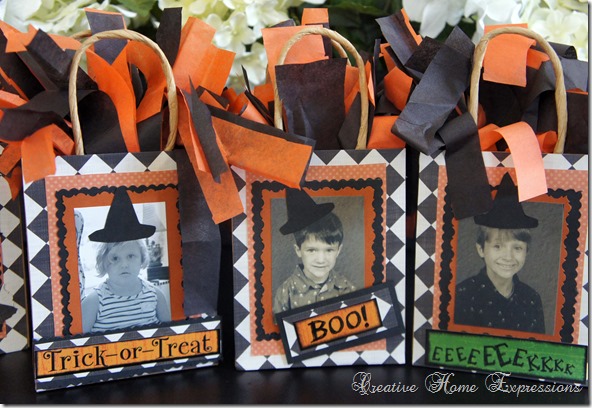 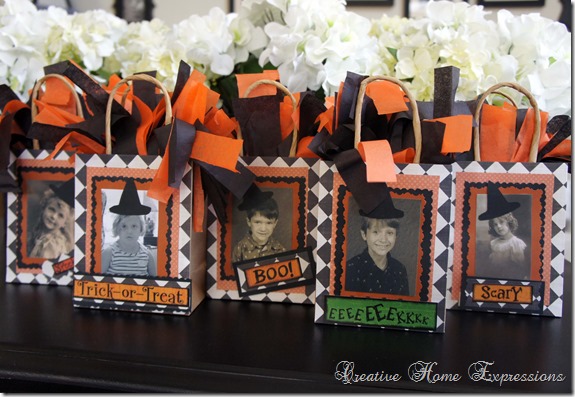 A big thank you to my daughter and sister for allowing me to put the kids’ pictures on my blog!

How cute are these? Love how they turned out. I'm intrigued by the way you cut the tissue paper for the inside of the bag! I'll have to remember that trick!

Very cute idea. Congratulations on the birth of your second granddaughter!

These are so fun, Kathy...the kids will love them! I love how you made the shred, too!

Oh my gosh, so cute! The boys will love them. I'm over hear giggling at all of the cuteness. =)

*here* Over here giggling. I hate having typos. =(

Oh my gosh Kathy these are too adorable. Love this.
Kris

Totally fun bags. It would be great to have a dinner party and use photos of the guests on each bag and then as the name card for place-setting (smaller bags of course). Creative Halloween Bliss...

Those are super cute, Kathy!

Hi Kathy, how adorable. These are the cutest treat bags and adding the photos make them extra special. The kids are so cute! Thanks for the inspiration. The ideas around this are endless.
Hugs. cm

These are so great, Kathy! Very original and cute. I bet my daughters would like to make these for co-workers! Thanks and have a great day.

The kids are so lucky to have you as their Halloween fairy! The bags look fabulous, and I love the little witch's hats!
xoKathleen

These are so adorable Kathy....what lucky recipients!..

What a great idea for personalized treat bags, Kathy! Pinning to share on my Fall/Halloween Board.

Those are very cute bags, I could see using them (different colors) for so many parties and fun kiddo events! Thanks for sharing! Blessings, Cindy

Tea in the Library said...

Love these. So cute. I've been catching up with your back posts. I slack off in the summer. Congrats on the new grand daughter. You do not look like a grand mother! Anyway - love your August urn and your many projects! Cheers

These are wonderful and it looks like you had a lot of fun making them.
Amalia
xo

Oh my goodness, what kid wouldn't love getting one of your bags!
Trick or Treat is such a fun time for kids.

Oh, how cute, Kathy! The bags are so fun and creative. I'm sure your little ones will love them.