And Now For Something Completely Different! 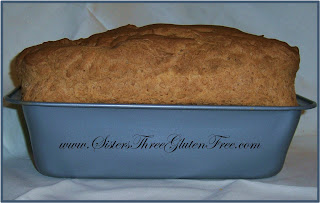 I'm going to deviate a bit (well, totally) from interior decor and design topics to post about something that is personal to me. I was diagnosed with celiac disease earlier this year, which basically affects your small intestine and you must refrain from eating wheat, rye, barley - no bread, no beer - you get the idea. You must read EVERY label in the supermarket.

After 9 years of stomach pains and "episodes", two doctors, two prescription medications and several tests, I was diagnosed first with GERD (gastroesophaegeal reflux disease) and then IBS (Irritable Bowel Syndrome) They were all wrong!

In November I happened to be reading something when I came across the medical term "celiac sprue". I wanted to know what it was and looked it up on Web M.D. Oddly enough, celiac disease came up and the symptoms were exactly what I was going through. I could not even enjoy a meal out with my husband because I never knew if an "episode" would hit.

In reading this article it said that celiac disease can take up to 9 years to diagnose - 9 YEARS! It is usually diagnosed as Colitis, IBS, Crohns Disease and a couple of other diseases. It also said that a simple way to find out if you have celiac disease is 1. a blood test and 2. change your diet - if you felt better after 2 weeks, chances are you had some kind of gluten intolerance.

I had tried everything else, including prescription medication which wasn't helping. I still had "episodes". I was coming up on 9 years since the symptoms first started. I changed my diet to gluten free on a weekend and by Monday I FELT FANTASTIC! It even affected my mood.

While it was difficult to find stuff to eat that had no wheat, barley or rye in it (did you know licorice has wheat in it - wheat in licorice!) I felt so much better. I continued eating this way until I visited my doctor in March. I told her what I had done, that I felt so much better, and the information I read. To her credit, she considered this and sent me for a blood test.

The blood test came back POSITIVE FOR CELIAC DISEASE! I felt so happy to finally have the correct diagnosis; I hated the fact that I have this disease but at least I now knew what was causing my issues. Pretty sad that I had to diagnose myself - but I do believe that we know our own bodies best.


While I've been able to find substitutes for most of the food I like, bread has always been a trial and error process. After finding Sisters Three Gluten Free and following on Twitter, I was given the opportunity to test one of their breads. The mix was easy for even me to handle and this bread tasted really good!

Most gluten free bread is small - it's like having a tea sandwich. This bread I tried from Sisters Three rose to the size of a regular loaf of bread. I sliced a couple of pieces for a sandwich this week and it was so nice to actually eat a real sandwich again. This weekend I am going to try it as french toast, and I can't wait! 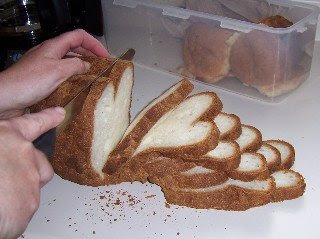 Please visit their website at http://www.sistersthreeglutenfree.com/ to see the other items they carry. It is a great feeling to know that I can eat a good bread again!
Posted by Kathy @ Creative Home Expressions at 10:39 PM

Wow, Kathy...It was so nice of you to share a personal story about yourself! You are such a detective...I could just image the look on your doctor face, when you diagnosed yourself...When after many year they couldn't figure it out! I'm glad to hear you have found a bread that you are able to eat without the uncomfortable feeling. Hope you enjoy that French toast!

Thank you, Jackie. It can be so disheartening to know something is wrong and nobody can tell you what is wrong. It is a great relief to know it can be controlled but right now diet is the only thing to help.

I hope that my sharing might actually help someone else who may have it but is misdiagnosed or, even if they are gluten free already they have another source for some well-tested food.

Hi Kathy, I have a dear friend who has that same disease (she was diagnosed about 5 years ago) and she loves to cook so if you want her info. let me know and you can maybe exchange recipes. By the way, if you like beer there is a gluten free one out there. ;))))

Glad that you are feeling soooo much better!!!!!

It is a sad reflection that no one thought to do the simple blood test. Yes, the good news is more stores are carrying gluten free foods and Smart Ones by Weight Watchers even has several of their frozen meals that are gluten free.

Thanks for sharing your story. I'm glad to hear that you finally got a diagnosis!

I discovered that Trader Joe's sells a brown rice pasta that's pretty tasty if you're a pasta fan!

Thanks Amy! I've actually found a gluten free pasta in my local supermarket - it is the best one I've tasted so far.

I like the crustless quiches that Trader Joes carries, plus they are convenient to bring to the office for lunch.

Hi Kathy. What an interesting story! My son-in-law is making the same kind of journey that you did - GERD diagnosis and trouble for many years, and stumbled upon an article about gluten intolerance. After two gluten-free weeks he is feeling much better! I will pass on your blog, with thanks!
Many years ago - at least 15 - my husband sourced a rice pasta for friends whose children had celiac disease. What a blessing that was for them to have something different to eat. A gluten-free diet is a challenge but what a difference it makes in quality of life!
Wishing you all the best in your road to feeling healthy!

Hi Debby ~ I'm glad my story might give others something else to consider if they are having similar issues. I have found that every month local groceries are adding more gluten free items. You kind of have to go through trial and error to find things that taste good to you.

King Kullen has a great pasta I found and cereal/breakfast bars; Stop & Shop has a natural/organic section where they carry quite a few things (pretzels, cookies, waffles, mixes and pasta). Trader Joes has a crustless quiche and Weight Watcher's Smart Ones carries several of their frozen meals that are gluten free. Oh, and Utz brand chips - ALL their chips are gluten free. Most brands just their plain chips are okay to eat, but Utz says on the back of all theirs "gluten free".

I wish your son-in-law a lot of luck. You definitely miss certain foods, but the trade off is well worth it to me!