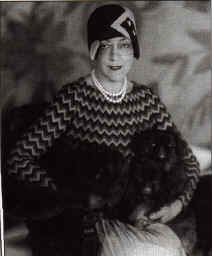 Elsie De Wolfe has been described as the first lady of interior decoration. She was the first woman to create an occupation as a designer where none had existed before.

Elsie De Wolfe was born in 1865 and did not begin her career as an interior decorator until she was 40. Her earlier years were spent as a stage actress, not the most favorably looked upon occupation of a lady from the Victorian era.

In Elsie's time, houses were decorated in high Victorian style; gloomy decors, densely patterned wallpapers and heavy velvet drapes were replaced with rooms that were painted in light, fresh colors or wallpapered in Chinoiserie prints. Elsie said, "I opened the doors and windows of America and let the air and sunshine in."

She loved the look of 18th centry English and French furnishings, choosing (for the first time in America) softly upholstered chairs, which someone could actually sit comfortably in. By removing most of the clutter (that some refer to as ugly) that accompanied the Victorian style of decorating, she opened spaces up for entertaining. It has been said that Elsie De Wolfe introduced society to the cocktail party and the small intimate dinner party.

It was Elsie who introduced the comfortable chaise lounge, delicate writing tables, potted palms and Persian rugs. She replaced grim Victorian era wall art and pictures with delicately framed mirrors in silver and gold gilded frames. She also brought in faux finish treatments and animal prints. Sounds to me like a woman ahead of her time!

Elsie De Wolfe was not considered a "beauty", but she kept fit, dressed well and stayed healthy. Her personal presentation was impeccable. Her decorative influence was the first to sell a concept that revolved around lifestyle. 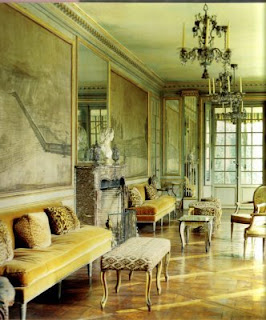 Elsie De Wolfe has said, "I was an ugly child and I lived in an ugly age. From the moment I was conscious of ugliness, my one preoccupation was to find my way out of it. In my escape, I came to the meaning of beauty."

What a fascinating woman she must have been!

I love her rooms, the toile curtains with the medallion valances, fabulous.

Wow...Totally reminisce of "Decor History!" Elisie introduces us to some of the "must haves" of home furnishings!

She was definitely a pioneer in the field with what she did for that period in time.

Thanks for stopping by my blog for a visit! I really like the idea of sharing these biographical sketches of inspiring decorators--a unique and educational subject that I haven't seen on other blogs. Hope we can stay in touch, as we have a lot in common!

Hi Amy ~ Well, thanks for coming over to visit mine! Also, thank you for your comment on this subject. I do enjoy learning a bit about these pioneering decorators/designers. I try to give just enough interest so eyes don't glaze over, but maybe others will feel it's worth looking more into it.