What Do You See?

I almost entitled this post “Do You See What I See?”, but then that Christmas song started going through my head.  Like. an. earworm!

Do you remember the post where I mentioned going back to Goodwill two days after I had been there, hoping to find something that I had picked up and put down again?  If you don’t, trust me, I did.  It was all the fault of Carolyn at My Backyard Eden and her project with chord charts. 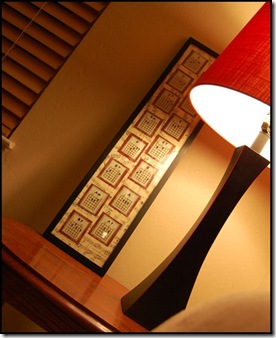 Picture from My Backyard Eden

A little background is needed here.  My son’s birthday is today; he’s 20!  He loves guitars and is basically self-taught.  I played guitar when I was younger, too, so including my old one, he has 4 or 5 different kinds of guitars in his room.  Carolyn’s chord chart project gave me an excellent idea to make something for his birthday.  With this. 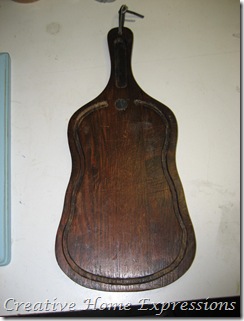 This is where the “what do you see?” question comes in.  The day I was at Goodwill and picked it up, then put it back down, it looked to me like a guitar!  When I eventually got it and showed my daughter, she didn’t see a guitar.   It is obviously some kind of wacky cheese board, but I saw a guitar.  And a guitar it shall become! 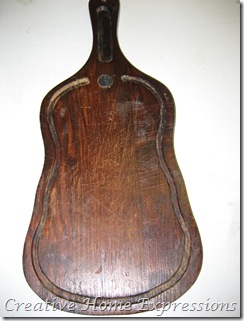 Since he always seems to lose his guitar picks {as I did when I was playing}, I decided to make this as a decorative piece, but also to serve the function of holding his picks.  First it needs to be guitared up!  I started by painting it with Rustoleum’s Oil Rubbed Bronze. 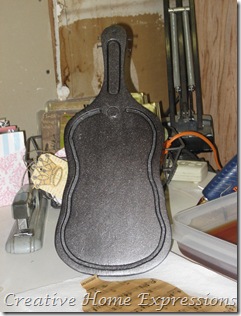 I then found tack like nails and put two on each side of what would be the neck/top of the guitar.  Don’t know if you can see them in this picture {above}, but they’re there. 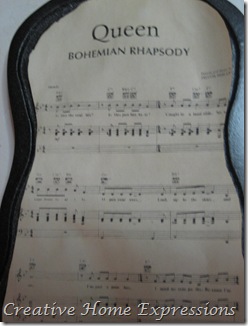 I got sheet music, in this case, Queen’s Bohemian Rhapsody {because who doesn’t like Queen!} and tea stained the papers to age them, after I cut them to fit the areas I wanted it to go in.  In this case for the back and the front. 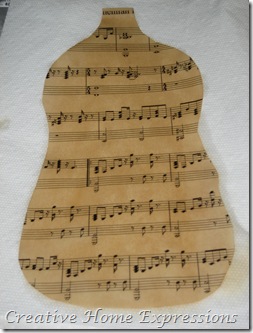 My hubby cut two small pieces of scrap wood for me, which were also sprayed ORB and became the pieces that would hold the “strings” and be the fret at the bottom. 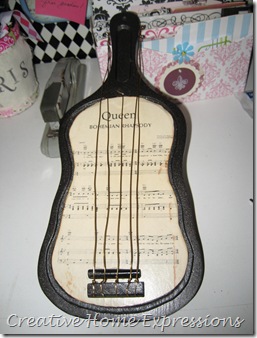 Some wire from the craft store to use as strings and a pick holder I found on Amazon {with some new picks}. 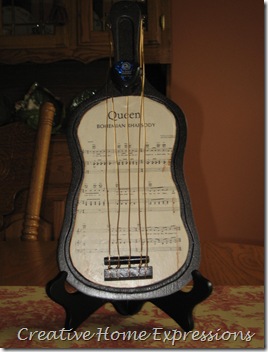 Does it look like a guitar now?  The picture below shows it with the pick holder attached. 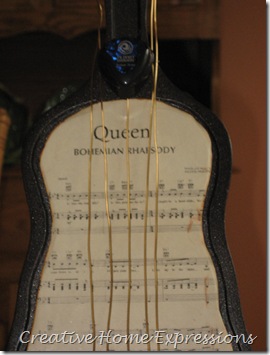 My thanks to Carolyn for the inspiration! 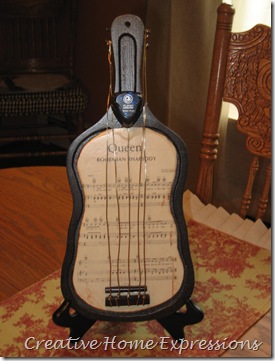 Do you ever “see” something that no one else sees?

Be Inspired at Room to Inspire

Make It Yours Day at My Backyard Eden

Posted by Kathy @ Creative Home Expressions at 6:46 AM

So cute, Kathy! What a thoughtful thing to do for your "little" man. Happy Birthday to him!

You are so creative !

Well this project made me smile! How great is that as a gift for you son. He is guaranteed to smile too! That took vision! Great job!

You are so creative!! I bet your son will love this.

What a wonderful, personalized gift for your son. I saw the guitar in the shape after you mentioned it but I don't think I would have been thinking guitar if I saw it on the GW shelf.
I love all the attention to detail that you put into the piece. I know your son will love it. Happy 20th birthday to him!!!
Jane

Hard to believe you have a twenty year old son, I suppose I'll be saying that tomorrow...and today is his last day of kindergarten! What a special gift, it turned out wonderfully...and too funny about the song, it is annoying when one gets stuck in your head!! Janell

Kathy, this is just absolutely fantastic! I DID see a cheesboard BUT I saw a guitar too!!!!

Happy Bday to your son!!! What a fab mom he has!

This is so cute and I saw the guitar right off the bat! My oldest plays and collect guitars too and is also self taught! I was always picking up pics laying around his room before he moved out, so I know what you mean. I love that you made this a functional and decorative piece. I bet he loves it!

I think seeing what others don't is what creativity is all about! What a fabulous gift! I hope he adores it :). (And yes, now I have the Christmas song stuck in my head!!!)

Now I am humming the lyrics. :) Well done.

What a great idea, I'm sure your son will love it!

it is most absolutely a guitar! how fun, and i hope your son will love it!

How creative are you!!! Love it!

Totally see a guitar! Totally! AND it is functional! LOVE IT!

Stephanie Lynn @Under the Table and Dreaming said...

What a cute find! The transformation is fabulous! I bet your son is going to get a kick out of this! Super cute! Stopping by from Just a Girl. Hope you are having a wonderful week! ~ Stephanie Lynn

Hi Kathy,
What a cute and very clever project. When you showed the board without decorations, it looked like a guitar shape to me. I just know your son loves it. There is nothing better than a homemade gift, made with loving hands.

Kathy what a neat idea! Happy Birthday to your son.

Oh how cute! It definitely looks like a guitar. Does he love it?!

What a super creative idea! I love that you saw a guitar in a cheese board - what a great gift. Thanks so much for linking up to Be Inspired today!

Isn't it great being a Visionary...you saw it, you dreamed it and then you made it happen. It turned out great. Happy Birthday to your Son and I'm sure this will always hold a special memory for him.

Happy Birthday to your son! He's no longer a teenager! Yeah!! This guitar turned out really cute. I am sure he loved it and the song was a good one to put on there. Great idea!

Kathy, What a great gift for your son. The guitar is so cute and I know he will love it. It looked like a guitar to me from the moment you showed it!
xo, Sherry

That looks so great! You are so creative Kathy!

Super-cool idea, Kathy! I turned out great. And I saw a guitar immediately when I scrolled down through your post ;o)

This is so great Kathy!!! What a wonderful gift for your son!! Very clever!

Holy crap, Kathy. This is you BEST PROJECT YET!! I love it. And I love creative, sentimental projects like this. He will always have this, and this beats out any high priced item on store shelves! You are the best mom ever!