I shared my first project with the cabinet samples I picked up at the Restore here.  As a quick refresher, these are what they look like. 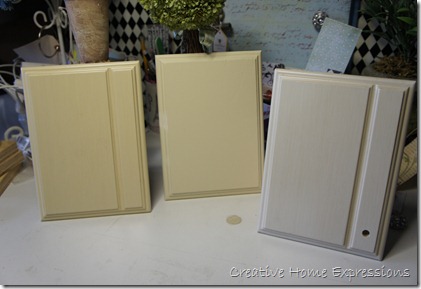 For this second project, I used the one you see to the right with the hole in it.  With my daughter and son-in-law’s first anniversary coming up next month, and my daughter liking the pieces I was putting together for this one, I decided to make this for them as an anniversary gift. 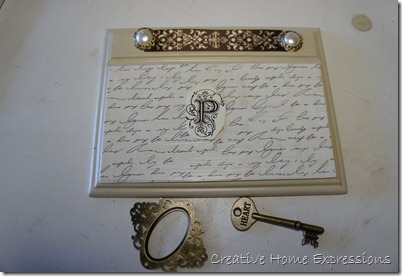 I put one of the buttons you see right in the hole with hot glue.  The other button I snipped off the back and hot glued that in place, too. 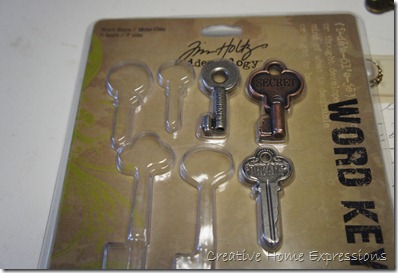 I used a script scrapbook paper, applied with Mod Podge {with a coat on top}.  I also wanted to use this label plate and word key.  Since it was going to be a gift, I decided to monogram it for them and found I had left over shower invitations that I made for my daughter’s baby shower last year.  I cut the monogram “P” from that and used it here in the label plate. 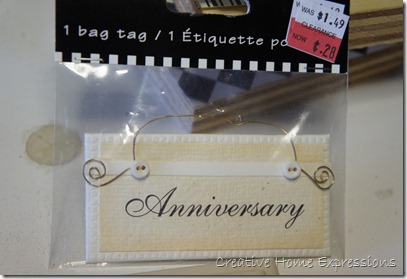 The key says “Heart” and I hot glued that on underneath it.  I had this Anniversary tag for a couple of years now, having found it in a box of stuff in the back of Michael's in their clearance area.  You can’t go wrong for $.28! 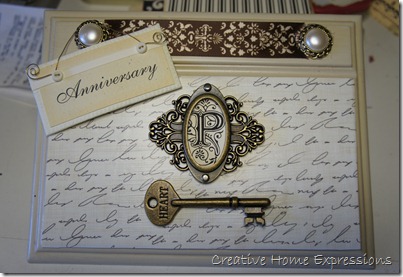 I just hung the Anniversary tag off one of the buttons in case my daughter wants to remove it.  I’ll get a nice little stand for it, so this way they can place it on a table, shelf or their dresser.  For these pictures I just used an extra one I had around. 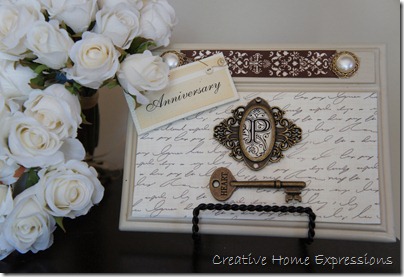 I love the way the swirls in the font work so well with the design of the label plate and how it has a vintage old-fashioned look to it. 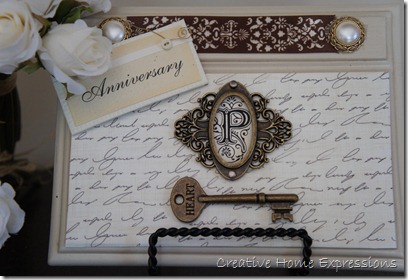 You’ll notice in the top picture that I bought three cabinet samples.  Well, the third one was an epic fail trying a new technique I had read about.  It was not salvageable in any way, shape or form, so it did go in the garbage.  Thankfully, these pieces were only $.50 each, so it’s not a major loss!

Really cute Kathy! You have such an eye for turning things into beauty!

Amazing work,I lake it!
Have a nice weekend.

Beautiful and what a lovely anniversary gift!!!

Beautiful, Kathy, and it makes a lovely, heartfelt gift!!

So pretty and very neat. Really a little work of art!

Very sweet. This came out great.

Just gorgeous! I love these!

Ceekay again...ok, this time it worked! A beautiful gift and thrifty too! Love it!

I love it. Personalized gifts like this are timeless and priceless. I'm sure they'll cherish it for years to come.

Hi Kathy,
What a beautiful vignette. I love the look. Thanks for visiting me.

Your daughter will love it! It is such a beautiful creation...Christine

Oh Kathy this is just beautiful. Our anniversary is on the first of June. If I had the supplies I'd make something like you inspired. Biggest hugs!

What a great idea to use those samples for this project. So pretty & a perfect, special gift.
Have a wonderful weekend!

Wow! How beautiful and expensive these look!

Hi Kathy! Love it! And I'm sure your daughter will too. How could she not?! You've been a busy gal. I adore the chair you revealed a few posts back. Just gorgeous! Another fabulous job.

Hope you're having a good ~ productive ~ weekend!
Carla

That is so totally cute! Love it! Thanks for the blog visit :)

Kathy what a beautiful project! I love the idea and it turned out great.