Gross Anatomy {Or A Halloween Pillow} 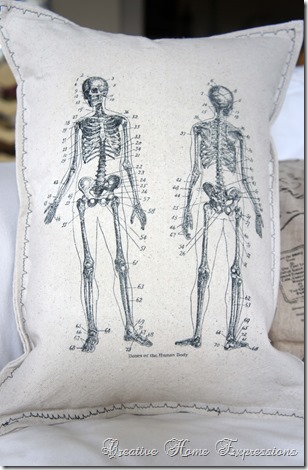 I’ve been wanting to make a pillow for my son and finally got to it the other day.  The only thing I had to buy was the pillow form and I used a 12 x 16 for this one.  I decided to use some left over drop cloth material for this pillow and two images that I had saved from Karen at The Graphics Fairy. 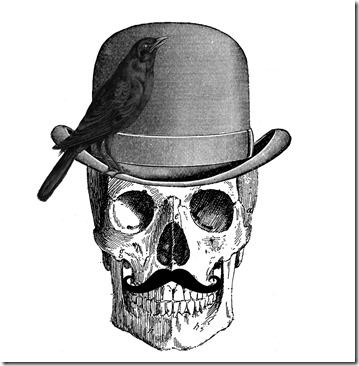 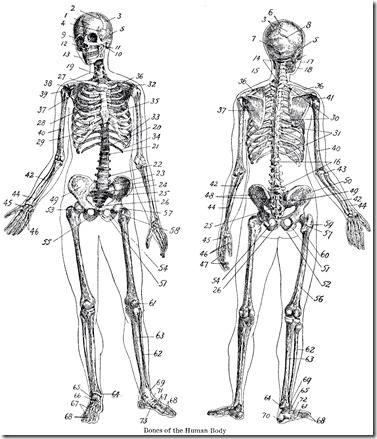 As many of you know, my son graduated from college in June with a degree in Athletic Training.  He is now in Pennsylvania pursuing his Masters in Athletic Training.  One of the classes he had to take was Gross Anatomy.  When he explained the class to me, I had to give him a lot of credit for dealing with that.  Anyway, I thought this pillow would be fun to help commemorate that class for him {although, I’m sure he will never forget it!}. 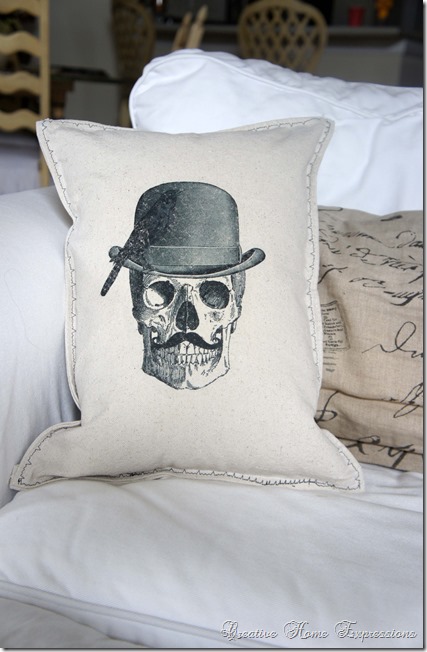 I was able to use a portion of the drop cloth that was hemmed, but for the other sides that were not, after I ironed on the images, I turned over the seams and ironed them.  Then I sewed those on the machine with white thread. 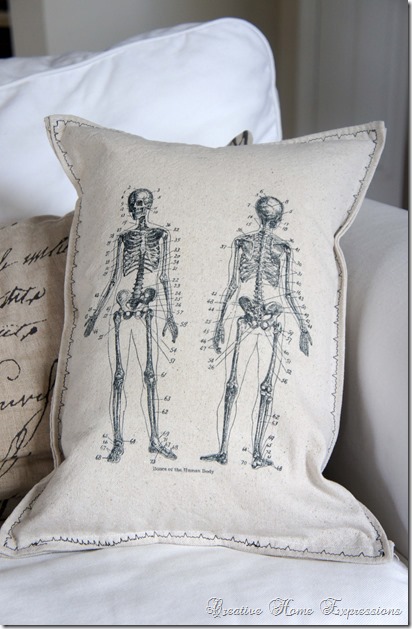 I wanted to put this pillow together with right sides facing out so I chose a black thread to sew it up.  I tried to take a close up shot of the stitch pattern I chose.  I thought it looked like a heart rate that you might see on a monitor.  I know, it is sad how I amuse myself {or worrying}. 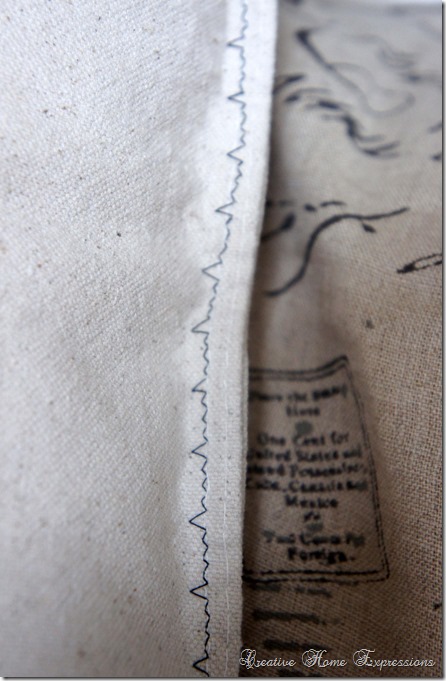 I like how the black thread gives some interest to the pillow as opposed to if I had just used white thread. 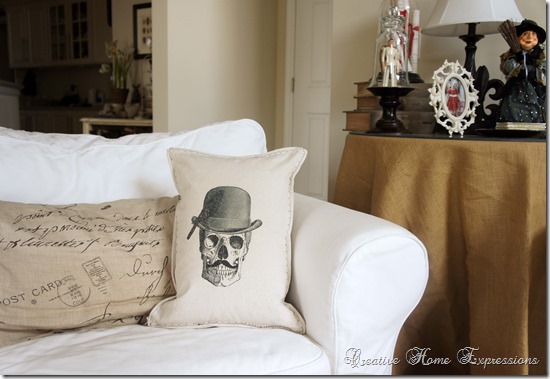 Typical for my pillows in recent years, it is reversible so either side can really be considered the “front”.  He can flip it to suit his mood.  Because of the images, it can also be considered a Halloween pillow!

The pillow is so cute. I also like the witch that is on the table in on the last post.

How fun and clever are these. I love them and the decorative stitch around the edge is perfect. Hugs, Marty

Wow, you really did kill two birds with one stone! Love that pllow, for Halloween or otherwise. Making it reversible is a great idea! And I think the stitching is awesome!

I need one of both of those pillow covers..

are they in your etsy shop??

The pillow is great, Kathy! I'm so much in a Halloween mood this year and love black and white decorations. What a cool gift for your son!
Hugs,
Julia

Oh how I love it Kathy..Halloween is my fave!

Your pillow looks amazing! I'm sure he'll enjoy it. I can only imagine what he's doing in class. I'm positive he's worked on cadavers, right? You can't do anything medical without working on them. Yikes!

These are such fun pillows. Love the graphics!!!

I am not a huge Halloween fan but this 2-sided pillow is genius! I love the size and the images are awesome. Your son will love it I'm sure! Will you have these in your Etsy shop???
xoxo
Joyce

Kathy, this is so cute! It's a perfect touch of Halloween! I love the graphics! I know your son will enjoy it!

Love the spooky pillows Kathy! Ive been contemplating making some sort of quilted and appliques halloween pillows.. just not sure I will ever get to them! lol!
have a great weekend
xoxo
vivian

Great Halloween pillows Kathy! Love the idea that they are reversible, very clever!
Have a great weekend!
Diana

Too cute, Kathy! How fun that the images and even the stitching commemorate your son's accomplishments. :)

Hey Kathy,
Those pillows turned out great! Your son will certainly enjoy them and be totally amused by them as well. They are fun!

That is exactly what that stitch looks like! I LOVE that pillow. I would keep it out year round. Then again, I'm a bit eccentric that way! HAHA! You must be very proud of your son. It sounds like he is well on his way to a career doing something he loves!

What a great idea! I've never seen this done and I love it. Great job!

Oh Kathy how cute and clever your holiday pillow is! Thank you for sharing.

I hope you have a week as beautiful as you are!

kathy, these are so cute, and the stitching is perfect! he'll love them:)

I love your pillow. The stitching was a clever idea!

I love those pillows and you're right the stitching looks like the cardiac monitor readings. Congrats to your son on his achievements.

These pillows are fantastic for Halloween and perfect for your son. Really enjoyed your post.

Would you be willing to sell more of these??? I would LOVE two of them!!

Stumbled upon this on pinterest...I am also an athletic trainer and used to live in Ohio! Small world :) I can definitely relate to the gross anatomy class I took while I was getting my Masters. Recent just purchased an anatomical skull and neck mouse pad for work. I think I'll try to make something like this for the office :) Kudos to your son and to you!