I had hoped to share a new sign I did today, but I am still waiting on the wording to arrive.  While waiting for that, I decided to move onto the next project.  About a year and a half ago, I bought one of these willow basket shopping carts from Joann’s. I added ruffle to the liner that came with it and posted about that here. 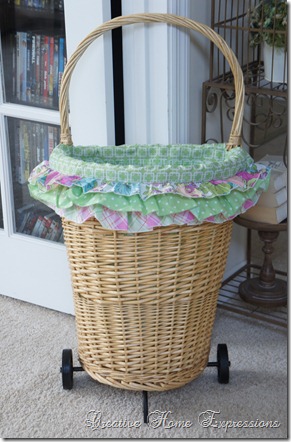 I had brought this to my booth to sell but it wasn’t moving, so I decided it was time for a makeover.  I originally bought the cart when I saw Laurie’s at Heaven’s Walk.  I brought the cart home from the booth and got out some light grey flat paint.  I would have liked to use French Linen chalk paint on this but the little bit I had left dried up.  I brushed a quick coat of paint on the inside and outside of the cart. 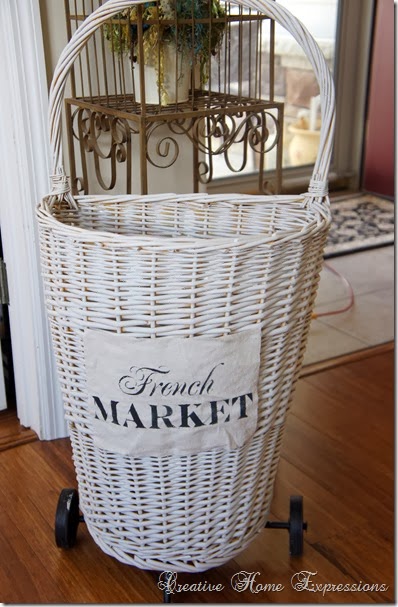 I decided to just add a fabric label to the front of the cart and used a left over scrap of dropcloth.  I probably should have ironed it first. 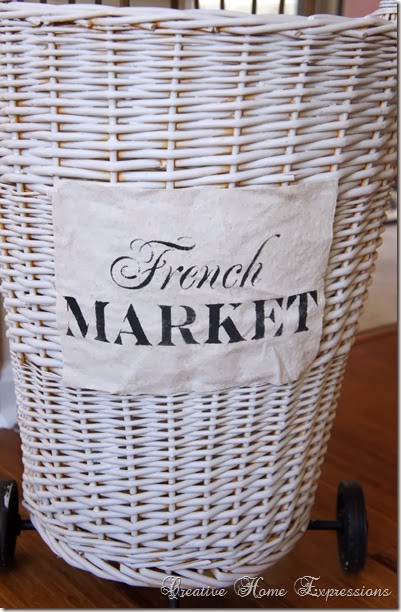 I used a French Market stencil that I had and some black craft paint.  A little hot glue in a couple of strategic places and it was attached. 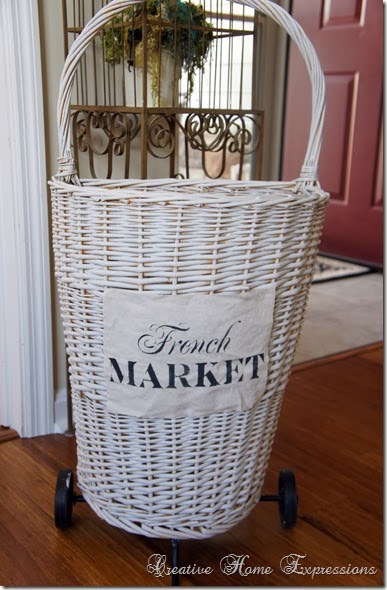 Now this willow cart has a whole new look going for it and I’m hoping it will go home with someone soon!

Posted by Kathy @ Creative Home Expressions at 8:30 AM

Really pretty - both before and after! I'm surprised no one grabbed it with the ruffle, but I'm sure someone will now. Love it!

Oh I really love the makeover. It is gorgeous and I am sure it will sell really fast. Hugs, Marty

Happy Monday Kathy. I have this exact basket from JoAnn's and did not know what to do with it. Now you have me thinking. Mine may need a up do too.
This is super sweet. It will sell quickly.
Kris

Love the makeover! I am sure it will fly out the door now!

Sherry at The Rusty Pearl said...

KATHY, TOOOOO CUTE> I just love it. Your one talented girl . You have inspired me to shop for a cute basket. Thanks my friend and have a blessed day

I love it painted...I think it was just the thing for someone to take notice and call it their own...

Fantastic ! I also want a shopping basket like this!
Hugs !

Kathy I just love what you have done to this basket. GORGEOUS!!

Kathy this is fantastic. It turned out great and I think it will roll right out of your booth. I would buy it for sure if I was there!! Love it painted and with the stencil.
Hugs

I love it! You did a fantastic job, Kathy!It's adorable!

Kathy, your basket is pretty both ways!

This should sell now with its simple look. You are wise to change it up. Creative Bliss...

It's beautiful! I'm sure it will sell quickly.

It looks perfect now Kathy! I love what you did to transform it to WONDERFUL!
sending hugs....

Love the new look..Hope it sells

Love the new look--but love the old look too. I am a sucker for ruffles--they make me happy :) I hope it sells--it is a lovely cart :)

adorable! this will sell quickly, kathy!

I Love it! Nicely done. Now it will sell in no time. You have given me an idea for a flower basket I have laying around here too.

Totally love it! I don't think you'll have any problems selling it with this makeover.

Oh this cute basket will be gone in no time!