A Basket of Fleurs & A Winner

Thank you for all the well wishes on our anniversary!  The winner of the Cutting Edge Stencil giveaway is announced at the end of this post. 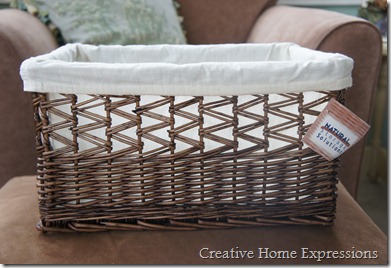 Sunday I decided to paint that basket I bought on Friday, especially since I decided to start the side tables in the guest room {and I’m using the same color on both projects ~ ASCP French Linen}.   Once the can is open and a brush has paint on it, I want to hit whatever I can that is getting that color in one shot. 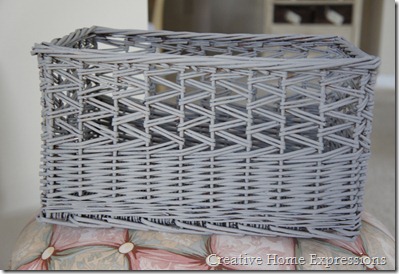 I just used a paint brush and went over it imperfectly.   Not too much paint on the brush but a little more than a dry brush. 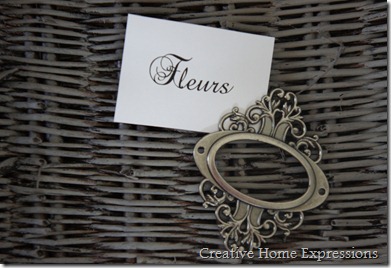 I also wanted to do a label on the front and found a decorative label plate I had that would suit the basket.  I printed out “Fleurs” on cardstock in a nice font and then attached it to the basket with hot glue. 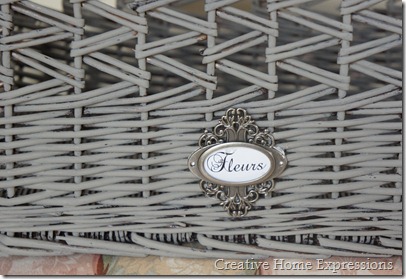 Stuck in my hydrangeas and she’s good to go! 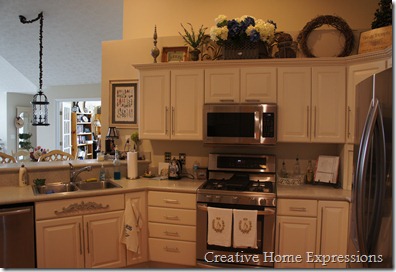 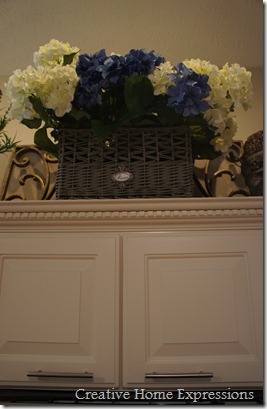 I have got to work on the top of these cabinets.  Some stuff will come down, like the grapevine wreath and Lavendar plant.  I think I either put too much or too little up there.   Some day I’ll get it just right! 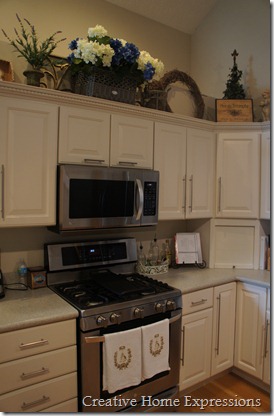 I’m hoping that later in the season, once I have my own hydrangeas planted and blooming, I can replace the faux ones with the real dried ones. 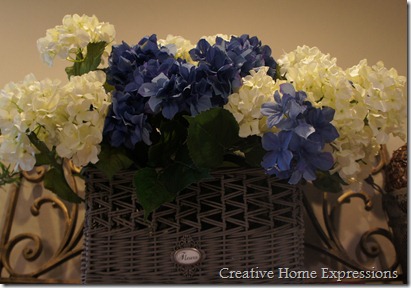 The winner of the Cutting Edge Stencil giveaway is

Shabby Chic Sandy from For the Love of White!

I will be in contact with you and I will need you to email me so we can get you the stencil of your choosing.

Beautiful! I've gotta get some gray spray paint... The hydrangeas look beautiful in there and they look great on top of your cabinets!
Susan
Homeroad

Absolutely gorgeous. Where did you get that label plate? I love how you added that to the basket. I am a huge hydrangea fan so of course I love what you have done.

Love the French Linen on the basket and cute tag.

The Charm of Home said...

This is beautiful. I love the tag!
Sherry

So pretty! And I love your kitchen!
Brenda

Kathy,
This this is GORGEOUS!! I LOVE your kitchen and the way you have decorated the upper cabinets....AMAZING job!! Thanks for the inspiration! xo ~Liz

Gorgeous basket, and I LOVE that color! Your kitchen is looking so pretty!

The basket is so pretty! I love your kitchen too. It's all very French looking. ~ Jamie

Kathy adore that color on the basket, perfect!! The label also makes it special.

Oh my goodness! I am so excited! I can't believe I won. Thank you, thank you!!! I had it like 3 times to make sure it was really me:)

Kathy that turned out so cute! I too have a hard time with decorating my upper cabinets! I'm limited to what I can put up there because there's not a lot of height space. Enjoy your day, Gail

this is a darling idea, kathy!

So cute. Love the gray on the basket.

Lovely transformation! I love the color and the beautiful tag - especially filled with Hydrangeas!
I hope you have a wonderful week,
Kathy

The kitchen looks terrific and I love the sweet touch on the basket!

Wonderful look! Gret job! I say go with what you like on top of the cabinets! I love to change things out frequently...

I have to get some French Linen from Jean next visit up to Tipp City! Your basket looks very "Frenchy" now, Kathy.:-)

Hi Kathy,
congrats to the winner!
I love the little tag you put on the basket and it looks perfect above your cabinets.

Great looking basket makeover. I love the color and it looks so good on the cabinets!

You are really goin to town with that ASCP :)

Kathy...love the color of the basket...
Yes, it is hard sometimes figure out just how many items to showcase on the upper cabinets...I have done it with many items and then finally settled in with less is more....Have a great day!

Love the basket painted grey...that label is soooo cute too!!! What a great touch!
~Des

Your basket is gorgeous, I am so jealous that you can grow your own hydrangeas, it is to wet here in the Orlando, they just rot...I've tried!

Darling basket Kathy. The tag is a great touch.

Oh, you did so good! I love dry brushing on paint too. Great effect and fun as well.

Oh what a beautiful home!!! So Dreamy!!

ps: I love that point in painting where my brush isn't dry, but it isn't too loaded with paint... like you speak of... perfect for this technique ♥

Love that tag! It just makes the basket so special.

Love the way you tweaked your basket. I know what you mean about figuring out how much to put above the cabinets.
Mary Alice

What a nice makeover on that basket and it's big enough to make an impact on top of your cabinets. They are always a challenge to decorate. I have a wall unit top in the same great room so I have way too much high space to deal with. Still a work in progress for me too.

I'm dying to try French Linen. SO many great things I could do with that color.
Love the basket Kathy!
xoxo,
Kim