Monday morning had me waking up to this little black and white picture of my world.  I took these pictures shortly after I woke up through one of the sunroom windows.  I know this view is not new to some of you who got some snow last week. 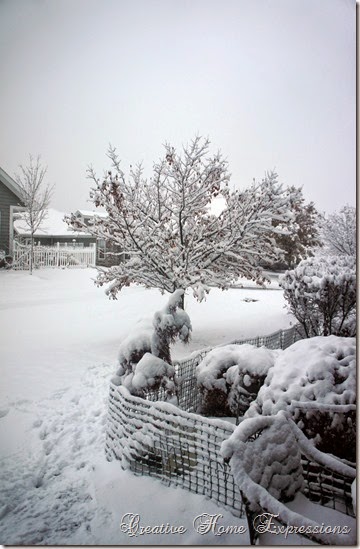 The early hour and the snow did give off a black and white visual.  As beautiful as it looks, it was a forecast that I hoped would be totally wrong.  Since I have been working part-time since June (in the mornings), I was not looking forward to driving in this. 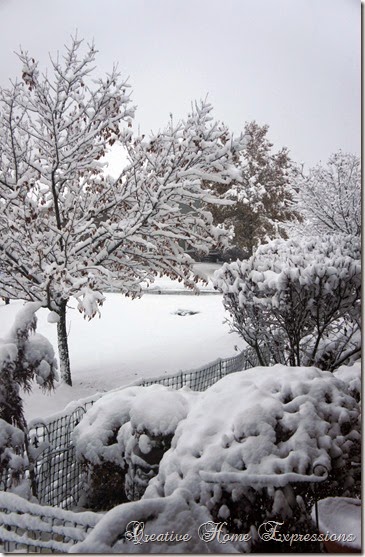 Just like I won’t decorate for Christmas until I’ve celebrated Thanksgiving, I’ll thank Mother Nature to keep her snow until at least December 1st. 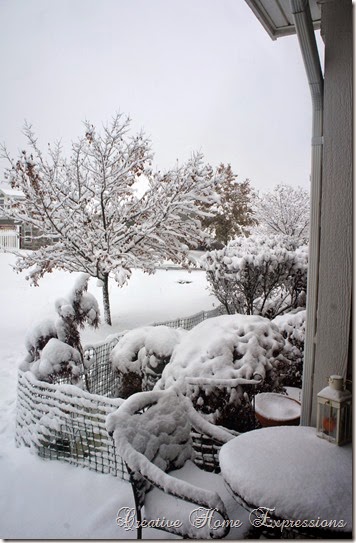 I am definitely not ready for this yet!

Oh- Kathy- I am not ready for it yet either! As beautiful as it is-it has the ugly underside of cold and ice and slippery roads. ugh- xo Diana

It looks beautiful, but so glad I am not in it.

Lin from A {tiny} Cottage In The Woods said...

Yes, temps have been below zero here & snow is on the ground. But I am ready for it. Finishing up all of the autumn chores tired me out & I'm ready for a long winter's nap. :)
Stay warm!
xoxo,
Lin

We had our first snow Nov. 1st. Your snow looks beautiful, but not fun to drive in!

Oh no! Poor you. Nothing here yet but it's bitterly cold today. I just can't. It's only November 18th.

Courtney@Golden Boys and Me said...

The snow looks so gorgeous! No snow in NJ yet and we are jealous of all of your snow :) I do not enjoy driving in it either.

Oh my goodness. We had alittle, but not much. I am not ready for it either. Too early for snow.

We got some too, and more on the way tonight! I'm not happy either!
xoKathleen

Our old neighborhood had their first snow. We used to live on top of a mountain. We don't miss that at all. We will get our fair share of snow but not this early.

Tea in the Library said...

Great photos. I'm humming 'Over the river and through the woods." and thanking God I don't have to deal with all that white stuff yet. I didn't mind it in Michigan but out here it is just sloppy and slushy muck.

What a gorgeous winter Wonderland! Please send some our way! Do be careful on your morning drives! Thanks for sharing a bit of your beautiful landscape!

Wow it looks like you have more snow then we do here in mid- Michigan.you are right although it is pretty it shouldn't happen until at least December 1 and even then I could do without most of it.
Drive safely.
Kelly

pretty to look at but no fun to drive in. we have the stuff and i'm not ready for it either:)

So pretty but I agree not fun to drive in. This is exactly why I moved to Arizona, I hated driving in snow and ice.

It's beautiful but I'd say no thanks at this point. I hope you stay warm. :)

It is very beautiful!

The snow is very very pretty out your window and it is sort of neat that it looks black and white. I love it except I worry about everyone having to drive in it. I'm glad we have city streets and expressways that are mostly clear. Country roads would have me on tranquilizers just worrying about my kids!! And I avoid driving in it unless it's an appointment. When they are all home, I love to see it, take a walk in it...shovel. Just enjoy the beauty. :)

Sorry Kathy, but it is pretty! I know you don't want to hear that from someone who lives on the gulf coast. Hope you have a wonderful Thanksgiving.

Not fun to drive in but sooooooo pretty!!

I'm never ready for it but it always happens! We are going to have a slight warm up this weekend... I hope a bunch of ours melts!

Wow so much snow! I wouldn't be ready for all of that too!