I found two bread boards at Goodwill last week.  I don’t see them there very often so I grabbed both of them.  Unfortunately, I didn’t take any before pictures of this one, but I will make sure I get one of the second one.  I decided to try out the Mod Podge transfer method again.  My first try a year or so ago wasn’t very successful, but I think it’s because I didn’t let it dry overnight. 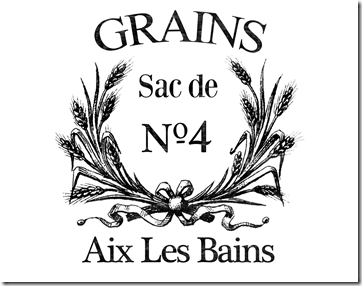 I used this great grain sack image from Karen at The Graphics Fairy.  My sister, Jeanine over at Okio B Designs, just used the same image and transfer method on her own Goodwill find.  I printed out several images when I was going to the library last month and copied them on the copier at the library. 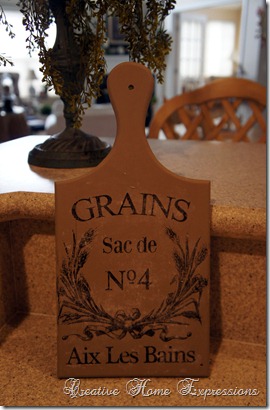 Some ASCP French Linen is the base.  Because this was a somewhat dark board, and had an owl painted in the middle, it took three coats.  I waited between 24-48 hours after painting and then, using the reverse printed version of the above image, applied Mod Podge and attached it to the board.  Smoothing it down and letting it dry overnight. 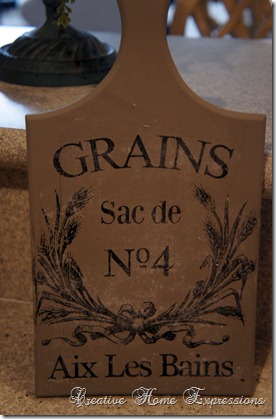 The above pictures show that I still have a little more cleaning up to do, because I can still see some glue residue. 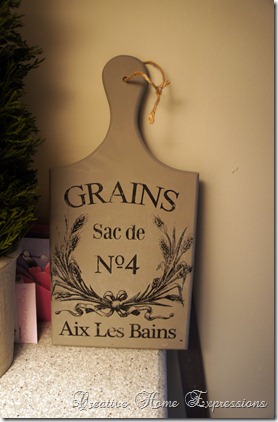 After resorting to using my finger, I think I got it as good as it’s going to get!   Otherwise I’m afraid I’m going to remove too much of the image.  I added a bit of twine to the top for a hanger and as soon as I get a hook, it will be getting hung up not far from where it is sitting here. I had originally thought I would put it in my Etsy shop, but I just love the way it turned out too much!  Maybe the second one!

Kathy, your bread board looks wonderful. I can see why you would want to keep it!
Hugs~~~ Daphne

wow I love it and would keep it too:)

This is really beautiful. I love the motif! YOu have a real gift at upscaling and repurposing!
Please bring this to TUTORIALS TIPS AND TIDBITS! Link goes live Wednesday evening at 8:00.
Great job!

Don't you just love those kinds of projects Kathy! That turned out so cute!! I'm always on the lookout for those bread boards and they are getting harder to find. Enjoy your day, Gail

that is super wonderful...im so scared to try that technique...maybe someday
hugs

That turned out wonderful! I tried that method with a printed picture on canvas and couldn't get it to work. You did great!

It turned out great Kathy! It's a definite keeper!

i'd keep it too:) love it! (i never thought to print these at the library--duh)

How cute! You did a great job!

I love it! I would never have thought to do that with a bread board before. You are so clever! That looks like something you would find in a french boutique.

You are so danged CLEVER.

That bread board is awesome.

Your bread board turned out super cute! I would want keep it too. ~ Jamie

Oh, Kathy, I love this bread board. I have been passing these up, but not anymore. I think your modge podge transfer worked great. I would have a hard time leaving it overnight too. I would have to take a peak before hand.

I love it too. I can understand why you wouldn't want to put that in the Etsy shop. It's just beautiful.

Jaye @ Just Trying to Make Cents of it All! said...

Very nice. I'm keeping my eyes out for one of those my next thrift trip!

I love it! I was doing this last week on a wooden plate and got ahead of myself. NEVER try to start rubbing only 4 hours since you glued it down! I get impatient!

That turned out great-don't blame you for keeping it!

So cute I love everything about it.

Love that print....it is really terrific..no wonder you are going to hang on to that one!!

I love it too! It came out great! I know you mean about having to stop picking the glue off. It's like you want to but you have to know when to stop at some point. I think it looks gorgeous!

That looks like something I need in my kitchen...love it! Thanks so much for stopping by a leaving such a nice comment,I hope to have some up in the next 2-3 weeks :) have a wonderful rest of your week.

Wow Kathy, that looks fabulous. I don't blame you for keeping it.

This turned out beautifully, Kathy! You inspire me to try it!

I've tried so many transfer methods and nnoe (seriously) have really worked for me. I've seen the Mod Podge method a few times lately and will definitely try it. Your board is gorgeous, I'd keep it too!

Im so curious about all the transfer methods. I really haven't done much in this department. I came over here to this post from todays post you wrote about how to do it...but still not too clear on the process.YOu apply th eMP to the image and place it face down on the wood...wait over night and then rub it off with water and your finger or a sponge or what? Help!!