I had an order for a couple of tea towels using a bunny image last week.  This one: 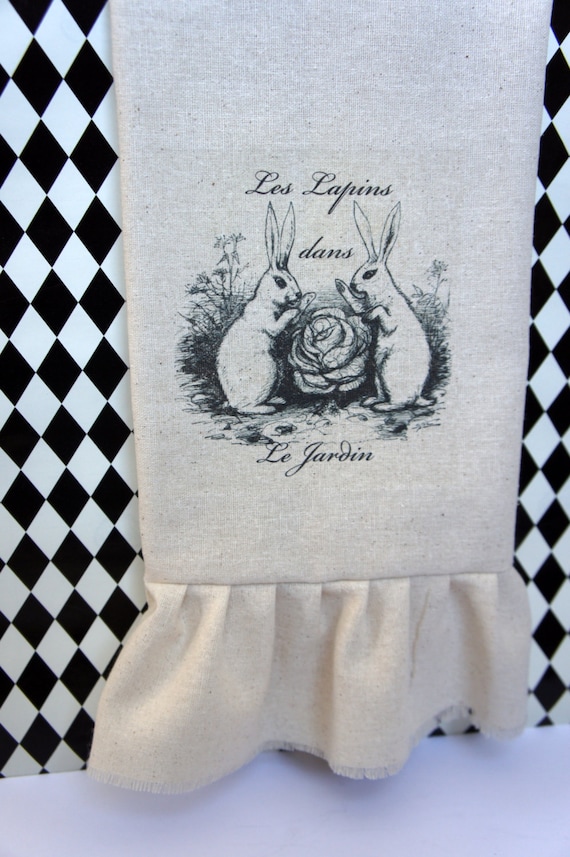 Sometimes, even when you use “the best” transfer paper, the image doesn’t always transfer well.  That was the case with this particular towel.  I got my towel order done properly and sent off, but I hate having to throw away the fails.  This one wasn’t too bad and I thought I might try to dress it up a bit and keep it for myself. 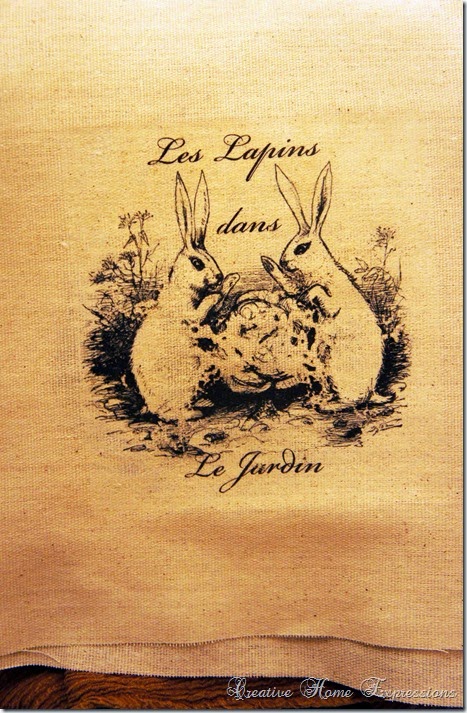 I decided to use a sample fabric I have had for some time in my fabric stash as the ruffle, rather than doing the usual Osnaberg ruffle I add to my tea towels.  As a point of interest – I sew a line near the bottom of the ruffle, so that any fraying will stop at that point.  I do this on the Osnaberg ruffles especially, because Osnaberg is prone to fraying. 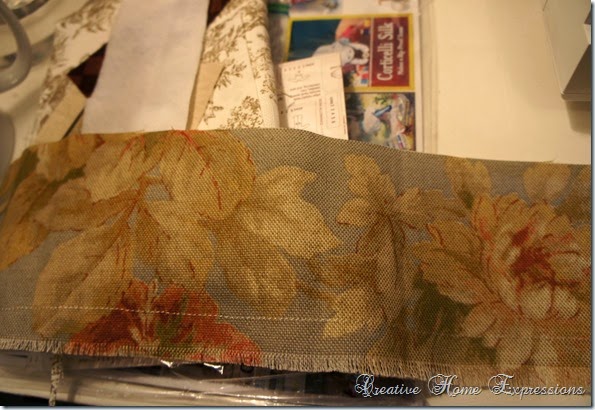 This fabric has a pretty faded look to it. 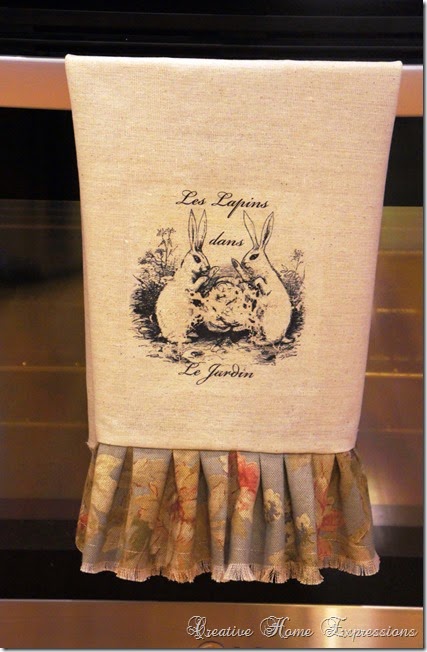 Here it is hanging on my stove (just for decoration).  Although the image didn’t totally transfer the way it should have, it still makes for a pretty tea towel to use for my Spring and Easter decorating. 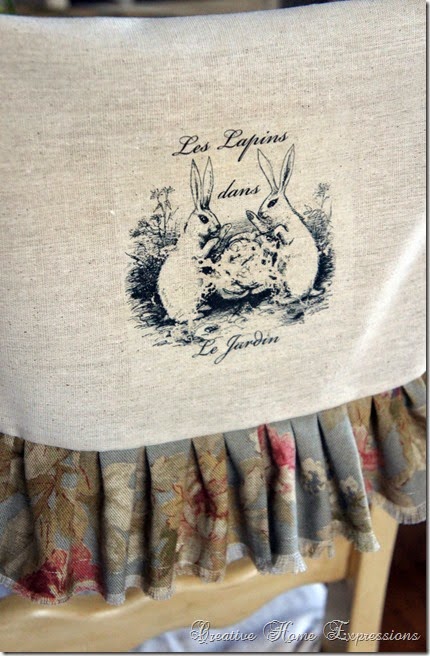 Since I love bunnies, and have so many out all through the year, I will probably pull this towel out to display all year long, too. 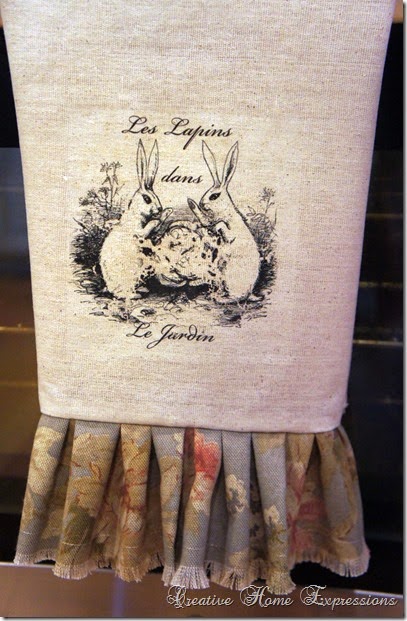 So glad I was able to (somewhat) save this towel fail! 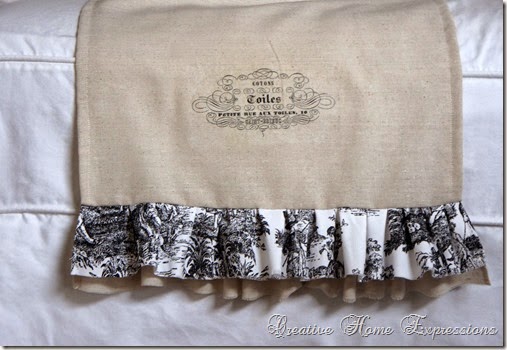 Along the same ruffle lines, I had made up this towel with what looks to be an old ad for toile fabric. 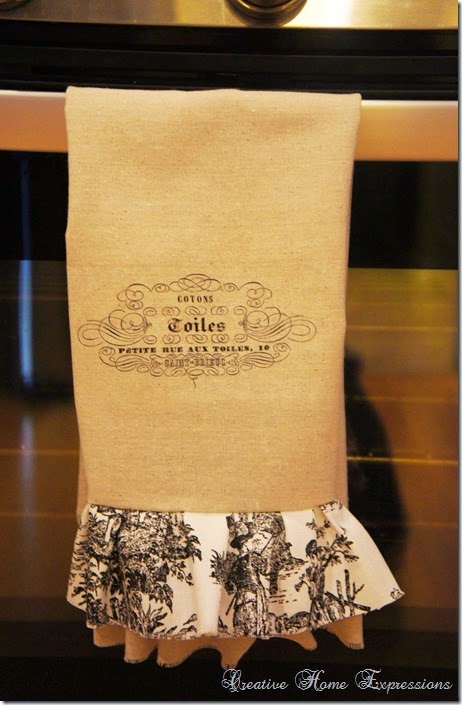 I just had to add some toile in, so this towel has a double ruffle of a black and white toile, as well as a little bit longer Osnaberg ruffle.  This is currently in my Etsy.

Hi Kathy,
I can't really tell that you messed it up because it's so pretty. Love them both.
I have done the same. A few times I've forgotten to reverse the image and ended up throwing away that expensive transfer paper! Duh! And sometimes the fabric won't accept the ink as well as others. Oh well guess it's just the nature of the beast!

Great save, Kathy! I just realized that you are using my curtain material (Waverly) as the ruffle on that first towel. Don't you LOVE it?
Good job- and at least you will be able to use it now. xo Diana

I love it, both are so pretty. You always make the neatest things and your transfers are wonderful.

I really couldn't even tell it didn't transfer correctly. I keep all of my oopsies for the house. I can live with a little smudge here and there. No one ever notices. Well at least they never mention to me if they do.

I can't see the fail. I think it's perfect but I get that it bugs you. You notice the problem. I've had that with transfers on pots

Love both the towels. I too really could not see the "fail" with the towel. Love your towels!

Hi Kathy, your fail transfer turned out to be a great success. Love this towel and the fabric is gorgeous. So glad you could save this towel and use it for some spring decorating.
Love your toile towel too.
Gorgeous.
Hugs, CM

It was a great save, and I love all the towels, and honesty I don't see the fail either? Both so pretty!

Hi, Kathy! Thanks for stopping by and commenting on my china cabinet post. The doors on it had been bugging me for some time, then THE DAY came, when NO MORE! LOL I'm so glad we did it! I'm glad you like it better too.

About those darling dishtowels--the fail doesn't look like a fail at all! I think they are absolutely darling!! Happy Easter to you and yours! ~Zuni

Your tea towels are darling, Kathy! Even the "messed up" one looks so cute hanging in your kitchen.
Mary Alice

Oh Kathy it is beautiful...nice save. Hope you are enjoying your Sunday.

Well you certainly made lemonade out of lemons!..love the ruffle you added and the toile towel is beautiful!

We are our own worst critics, but truly, they both look beautiful and you've inspired me to get my butt in gear and do a transfer one of these days.