My daughter got this crib from my sister but wanted to update it for her new baby.  She has fallen in love with Heirloom White, as so many of us have, so she asked me to paint it Heirloom White. 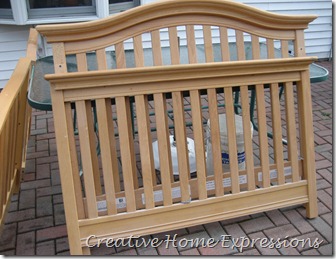 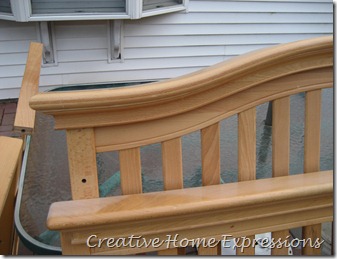 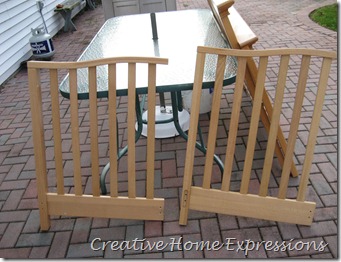 In the Fall, while it was apart, I spray painted it outside and, five cans of Heirloom White later, this crib has got a shabby chic look any baby would envy! 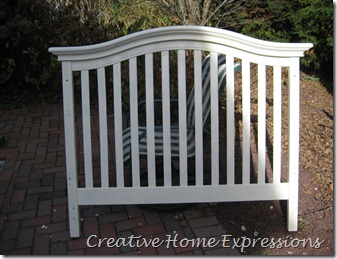 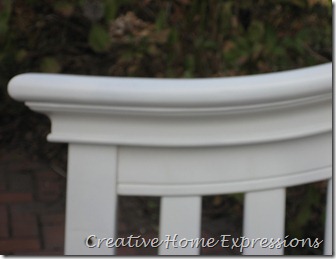 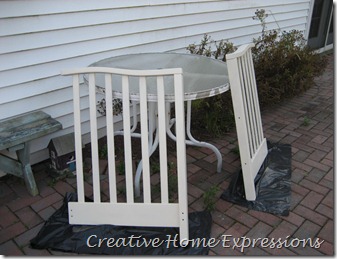 New Year’s weekend I had an opportunity to go to my daughter and son-in-law’s apartment and I loaded up the car with tension rods, rubber bands, extra drapery panels, a sheer scarf, my little tool bag, a sewing box and a few Command hooks.   This is a one-bedroom apartment with a somewhat large area that is probably supposed to be a dining room and living room area.  They split it with furniture and made one side the baby’s “room”.  This is what we came up with for over the crib area. 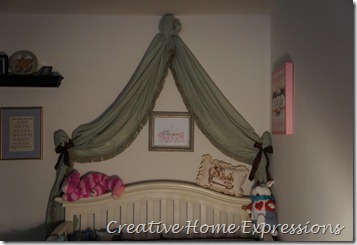 I’m sorry these appear so dark, there is no overhead lighting in this area and I had to rely on lamps. 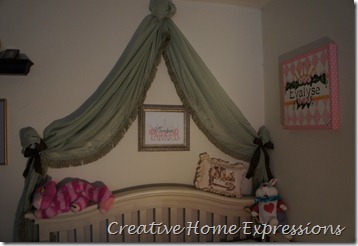 I attached three Command hooks to the wall in a triangular formation, using one of the larger hooks at the top and two medium size on either side.   I bunched up the middle of the scarf and wrapped a rubberband around it, and attached it to the hook by the rubberband, fluffing out the poof it made.  It covers the rubberband and the hook.  For the sides, my daughter liked the idea of using the brown ribbon {the bedding is a green and brown}, but I only had two strips of it, so we decided to leave the top one as is for now. 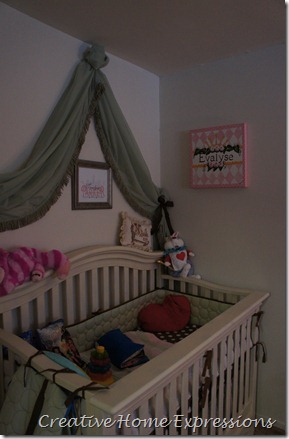 My daughter was really happy with this outcome and I was glad to do it for her and the baby!

Posted by Kathy @ Creative Home Expressions at 9:30 AM

Oh it just looks so beautiful! Great makeover too for the crib - I know there was some crayon marks on there from at least one little boy. =) Really beautiful - fit for a princess!

What a darling space!

You've made your grandaughter her own little corner in her own little world! Wait...wrong fairytale! Oh, well it still applies! It's just beautiful, Kathy. The sheer scaft really helps define that area. And I love the new look of the crib.

Kathy, what a precious space! Heirloom white is just such a classic color and it loos perfect on the crib! The curtain treatment is so pretty and what a great idea to use the command hooks!! I know she appreciated your doing this for her and the little Princess will have sweet dreams everynight!

Kathy, I love that you demonstrate to us how to achieve looks we see in magazines. It makes me feel as though I CAN decorate a room. I have a spare room to tackle as my New Year's goal. I am very excited you will be making tags this year with me. I can't wait to see your eye to design come to life in paper. Looking forward to Monday! Elizabeth

What a wonderful crib! And I love the Alice and Wonderland theme. Darling!

This is just fbulous, Kathy! The crib turned out awesome...it looks brand new! And I love the window treatment, it adds a really classic look. Your daughter must be over the top happy!

So sweet!!!! Your daughter is so lucky that she has such a talented mom!!

I just stumbled across your blog for the first time and thought I would say hello! I looked through a few of your posts and love your style.

I'm a blogger as well, about the world of art, but my history is in interior design and fashion. I love to hear what people are saying! Hope we get to see more of each other in the future.

Kathy, I love Heirloom White, too. The crib and nursery are ADORABLE. My daughter in law is expecting our first grandchild in May, not sure of the gender until next week, but I am going to forward this to her as she received a hand me down crib, also..oh if it's a girl I just love the colors and scarf!

This is soooo adorable!!! WOW! I love it...Also, I'm doing a feature on you in the next week on my I Owe it All to Him blog...it's a week of special friends!!!
XO

I love heirloom white. It's just the best. You did an amazing job. What a lucky little girl. It's the princess corner.

Hi Kathy, wow your daughter's crib turned out great! Love the heirloom white. You know it's funny but I've never worked with that paint color before. I need to. :)

Hi Kathy! I'm a new follower (and grandmother). I can feel your excitement in your post :) The crib turned out so pretty and your daughter's set up is gorgeous! Thanks for sharing the all the information and pictures.
Molly

You did a fantastic job! Heirloom White is the Cadillac of the shabby whites so you can's go wrong! I love the way you draped the scarf...everything looks wonderful!

HI Kathy please pop over to my blog as I have an award for you..xx

Oh gosh Kathy that is sooo pretty! What a lucky little girl:) Love the colors and the scarf adds so much to the crib area. Beautiful!

Beautiful! Fit for a princess. That Heirloom White can transform anything. I am sure your daughter just loves it too. Love the fabric treatment you did too. Looks lovely,

Awww! It turned out so adorable, Kathy. Isn't it fun preparing things for "grandchildren"? I'm now helping my daughter redecorate my granddaughter's room - for the big girl she has become at two-years-old. Where does the time go?