Time In A Bottle

I had purchased this bottle several months ago at Goodwill because I had liked the shape of it.  It took me awhile to come up with an idea for it, but I knew that I would use it for some project. 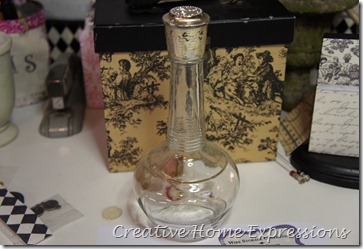 When inspiration hit, I gathered my supplies, printed out my images from The Graphics Fairy, found the sheet music online, and reused some Epsom Salts that worked as faux snow during Christmas. 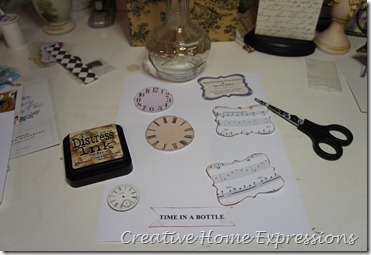 I had this great shaped tag that I kept from a wine gift basket and used that as my base and template. 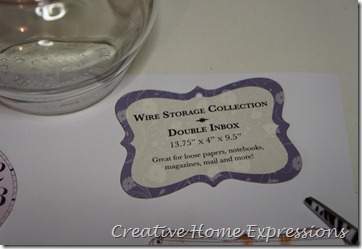 I chose the sheet music and title from the song “Time In A Bottle”, that classic Jim Croce hit, and built my theme around that. 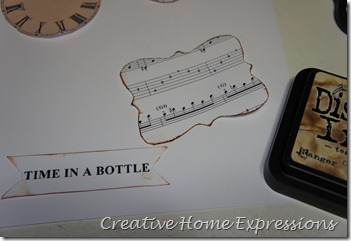 After cutting the sheet music portion to the shape of the tag, I distressed it a little around the edges.  I also cut the song title from the top of the sheet music and did the same. 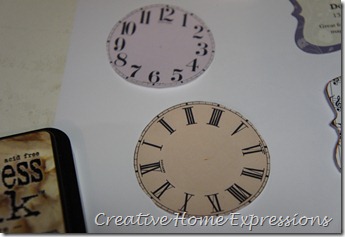 Using the clock images from The Graphics Fairy, I glued two of the same images back to back because I wasn’t sure how they were going to land once I stuck them in the bottle.  Using a black colored pencil I drew the hands of the clocks on each side and popped them into the bottle where I had already poured the Epsom Salts. 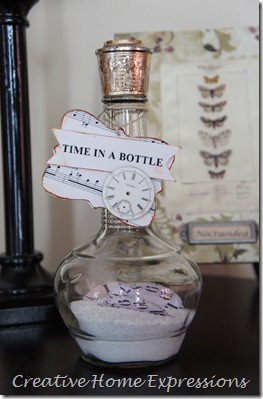 The clock faces each indicate the time each of my kids were born and I think the Epsom Salts gives the look of “the sands of time”.  A decorative accessory with meaning!

Posted by Kathy @ Creative Home Expressions at 11:37 AM

This would be perfect for the Linky I'm holding over at my blog!

This is wonderful, Kathy!!!

Love the idea of the time representing the birth time of your kids. Super crafty!

This is so creative and just adorable! What a great way to use an old bottle!! Thanks for the inspiration!!!

The Pleasures of Homemaking said...

Kathy, that's a cute idea! What a lovely way to use that bottle.

Wow, Kathy. I had to scroll back up the make sure I read correctly that you found the original bottle at Goodwill. I love what you did with it, just gorgeous. (And I love, love the song, also :)

Oh Kathy, I love this idea! Thanks for sharing and the inspiration.

That's a great idea kathy! Love it! And this from a gal with a wall full of clocks.

Kathy...I love this bottle and how you altered it and you have such a giving heart showing us how you did it! Thank you for sharing!

Oh, Kathy, you are so creative. Very thought out. I love it when so much time and effort is put into a project. It makes it all that more special. Love it, Love it, Love it.

What a great idea! Thanks for step by step tutorial.
Kinga

that's a great idea, and a great look! you know, the first time i heard that song i cried! what a sap!

What a great idea to have the clocks set at your kids' time of birth! I think the Epsom salts look like sand too...

Kathy, you are so creative- truly you are.. I LOVE this project..

Such a pretty project! Angie xo

Gorgeous bottle, and I so love how you worked with it - especially the clock faces with your kids birth times. Very nice!

Wow, what a great idea ... it turned out beautifully!

I love what you did with the bottle Kathy! Especially that the time reflects the birth time of each of your children. You put a lot of thought and love into this project.