This is a picture of the window treatments I have up in my dining room during the Fall and Winter months.  The coppery orange sheers are usually closed over and I love my victory valances that I found on eBay {I think they are Waverly}. 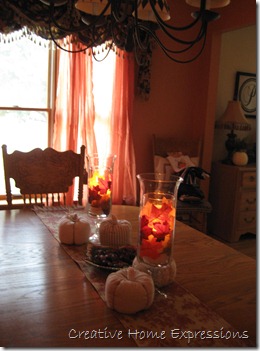 However, with the warmer weather coming, this gets a bit “heavy” feeling and while I could open the sheers like I did for the photo above, the walkway to my front door is right there.  I hate the idea of it being so visually open.  So, last year I bought these linen drapes and sheers from Target. 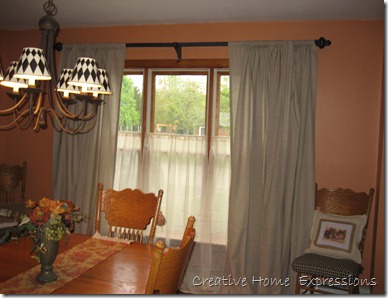 The linen panels were a great size {and $24.99 a panel} and I figured by the time I got done making my own or doing the dropcloth drapes, it would be about the same money, except I would have put more time into them.  While it was a lighter feel, it was a bit bland for me. 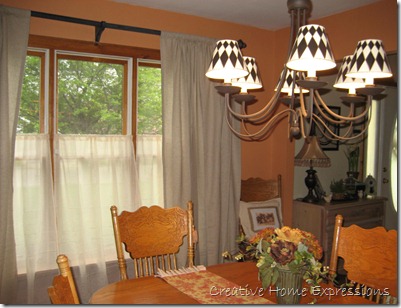 This year, as I took them out of storage, I decided to fix that.  After reading Sonya at Beyond the Screen Door’s blog since that time, I’ve become enamored of her window treatments and, specifically, her café style treatments.  I decided to dress up the sheers that I keep mainly for privacy. 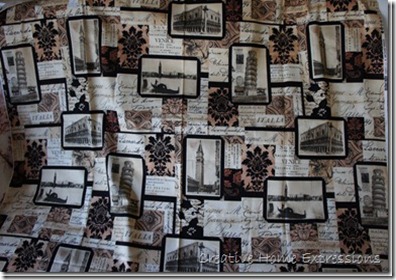 You remember I bought this fabric above and decided I’d like to get more and use it on a screen in my living room.  Meanwhile, I still had the two yards I originally bought.  I decided that the colors worked with both these treatments and I used it for this project.  I also used another fabric I had {the Osnaberg} that matches the linen drapes and used that to make a sleeve for the tension rods that I have to use on these windows. 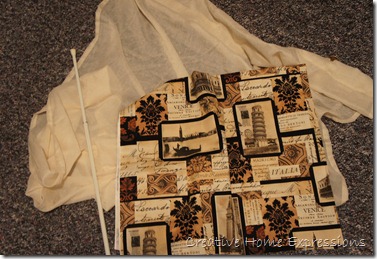 One of the best things I did was the sleeve for the tension rod!  Let’s face it ~ these things are ugly, but sometimes certain windows call for them when a regular rod can’t be used.

I used my living room windows {which are the same as the dining room windows} as my “mannequin” and put the panel I was experimenting on up so I could see how it would look.  I liked it okay, but wanted to add a little more "oomph” and whimsy; you know, make it a little more fun. 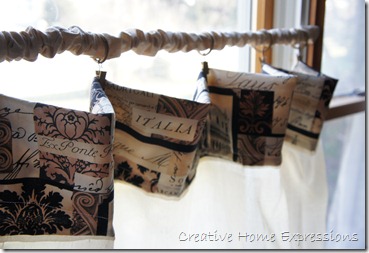 I wanted to incorporate another fabric into this mix and none of the fabric in my stash either worked or I didn’t have enough.   I decided to go with an animal print I found at Joann’s.  This must be from a zeraffapard {a mix between a zebra, giraffe and leopard}!  It has all three in the fabric and I used just a bit of this to make a ruffle.

I also bought some new trim because what I had on hand just didn’t work with these colors, although I could have left it off altogether.  I pinned the trim pieces to two of the panels to see which I liked better.  I do like them both, but I think the wider trim hides more of my sins, so to speak. 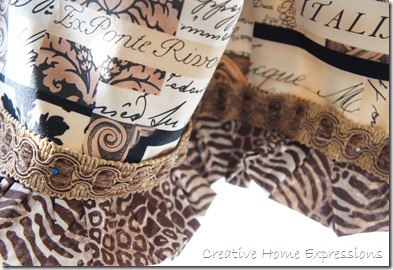 This one {below} is actually two trims ~ a small pompom and a flat trim. 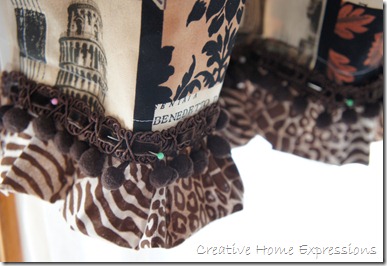 I used this fabric glue to adhere the trim. 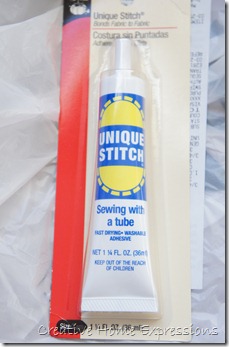 Here is my finished look!  Sorry about the sun ~ it makes taking pictures of the window very difficult. 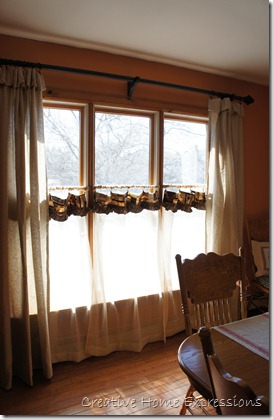 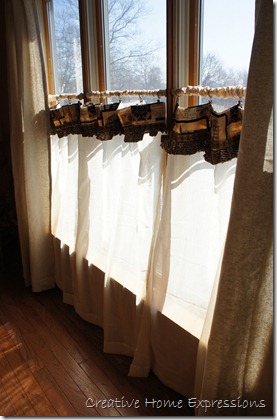 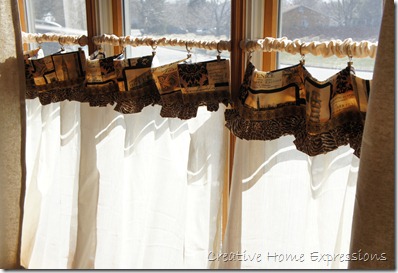 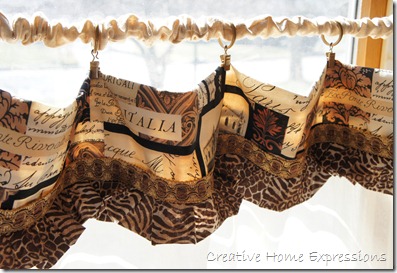 I’m so glad there were only three!  But now I’m wondering about those linen panels . . .

Hi Kathy! I love this new look! How creative of you to cover the rod with ruffled fabric!! The trim fabric you added at the top looks great! You're good and so creative! I love Sonya's blog too!
I'm having a party on April 5th - Heart of the Home Party - Show Us Your Favorite Cupboard! I hope you'll come!
Be a sweetie,
Shelia ;)

What a difference Love the new look! Visiting from Met Mon!

Looks great- I wouldn't have thought of adding the extra fabric at the top. Our dining room is also right next to the sidewalk and I almost always leave the drapes closed. I'll have to do this so I can get some light in. Thanks for the idea!

Kathy I love it!! And what a great idea covering the tension rod with fabric!! They look great, Martina

Kathy, what a difference! These look great! What a transformation a few hours, a couple of fabrics, and trims can make. I've always liked the idea of chaging out my drapes for the seasons but never got around to making extras. And this is a great look for your house being on the market.
Going to be on the lookout for one of those zerraffapards!

I really love the new look! I have a new blog! It is about my mother's recipe box. Please visit and become my very first follower!
http://rocknrecipes-rocknquilts.blogspot.com
Thank you!

It looks wonderful. I love the look. I especially love the mix of fabrics. So light and airy and yet you still have the necessary privacy. Great job. Hugs, Marty

Oh Kathy, it looks great, you are so creative!!!
Hugs~~~ Daphne

Oh Kathy, it looks great! I really like the linen panels with the trim. Thanks for the inspiration.

Oh wow they are so cute! I love sheers but adding that bit of fabric was brilliant Kathy!

Wow, that looks really great! I love the fabric you used including the animal prints. I have yet to tackle curtains. I know my limits!

Cute! I love 'em. I love your choices in fabric and the rod cover. So Paris cafe'. Great job and what a difference it made in this room, enjoy!

Great job Kath - much nicer for the warmer months. Have a great week girl!
xoxo,
Kim

I love how these turned out! The fabric you used is awesome! And I love all things with trim. :)

I've never considered hanging drapes halfway like that. My windows are always open because I like letting the light in, but this is a great idea for adding some privacy.

Wow, Kathy! What a difference! I love the way you combined all those different elements into a pleasing, cohesive whole. (You had me laughing at your "zeraffapard" comment!) I especially like the way you encased the rod--the sleeve looks so much better than a bare rod would look. You did a great job!

How pretty Kathy! You really created a unique and special look for the window. Great work.

I like Sonya's cafe style panels too! Yours came out wonderful~you did her proud!

Very creative....I love the change, and the chandy is perfect with those shades!

You are a true designer indeed! Never, would I have thought to do that and it is so pretty.
What a difference it made to the window.
Rhonda

Hi Kathy! What a clever idea. I love the fabric and touch of whimsy it adds to a simple window treatment. Nice job. Thanks for popping over.

Kathy, I love the whole new look, but I especially LOVE the ingenious idea to cover the rod!! How long have we all been looking at those ugly rods?! We instinctively cover chandelier chains but leave rods visible - a missed opportunity and you've just fixed it. (((giving you a high five!)))

Kathy I adore the linen panels, and you are so creative...why don't these ides come to me?!

I have a Giveaway from The Zhush I know you will love!

Hi there.....you did a great job on those curtains and sheers. Now you can leave them open and enjoy the sun (until it gets too bloomin' hot!) and still have some privacy! I'm adding myself as a follower. Hope you drop by my blog and see me sometime. Happy Spring Ya'll from Houston!

I so love the fabric! Very European!

Very yummy! Don't you love when a creative solution hits? Thanks for stopping by my blog earlier!

Love the new drapes! THe mix of fabrics is yummy!

I love the way you covered the curtain rod! The new curtains look wonderful! The combination of fabrics is perfect!
xo
Robin
(Thanks by the way for always linking your great projects!)

Hi Kathy! The window treatments turned out wonderful. How creative you are to cover the rod. Beautiful!
Hugs,
Sherry

I love the "oomph" and "whimsy" you added to your cafe curtains! The fabric is darling too.
Visiting you from Tater tots and Jello!

WOW! These are simply AMAZING! I'd love to have you link this to my VIP party today! http://designergarden.blogspot.com/2011/03/vip-party-9.html

Kathy!! I LOVE your cafe curtains!! They turned out so cute and that lil tray and bunny on the table is adorable. Heading over to Etsy to check out your Clip Its which are lovely a well!

Very nice curtain! I really love its style and uniqueness.