When I got the latest Ballard Design’s catalog and looked through it, there were two things I marked as projects I’d like to try making.  The first one that really grabbed me was this pair of shadowboxes for $269.00 called Document Shadowboxes. 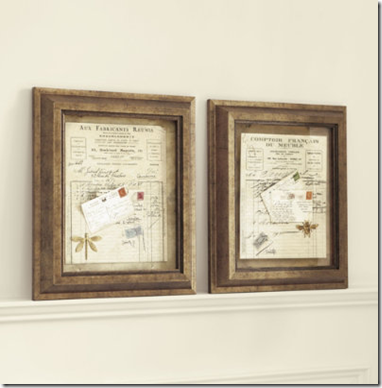 A couple of days after that Debbie at Debbiedoos announced her next Copycat Challenge party, so I felt it was meant to be!  I already knew that I would be cutting into my current 2012 Cavallini calendar to utilize for this project {note to self: do not buy calendars with really pretty pictures, to use as calendars, unless you pick up two!} 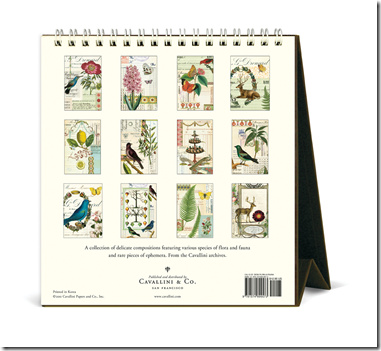 Off to Hobby Lobby I went to get a couple of shadowbox frames.  I got two 10x13 shadowbox frames and these were the only purchase I had to  make for this project.  I printed out postcard graphics that I had saved to my computer from The Graphics Fairy {this is one of them below}. 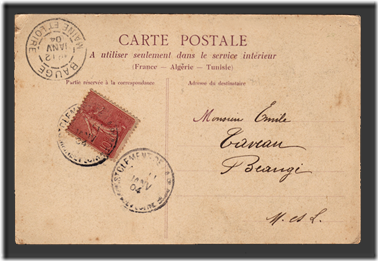 I used some Osnaberg fabric on the backing because the frame is a little bigger than the calendar images. I took the calendar pages {I tried to just stick with the months that passed already} and cut them for the shadowbox frame.  I applied the calendar pages with regular craft glue.  Then I used those foam adhesive pieces {found in the scrapbooking aisles} and placed my postcards.  This gives them a more dimensional look, like the inspiration pieces. 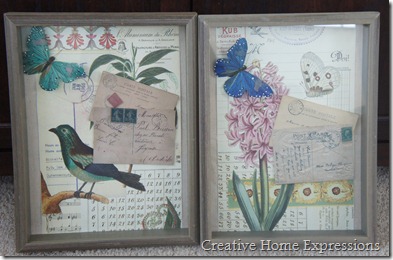 The dragonfly and bee shown in the Ballard’s picture are decorative tacks/pushpins.  While I could have found some kind of charms and glued them to pushpins, I found these butterflies a few weeks ago in the Michael’s dollar bin and decided to use these. 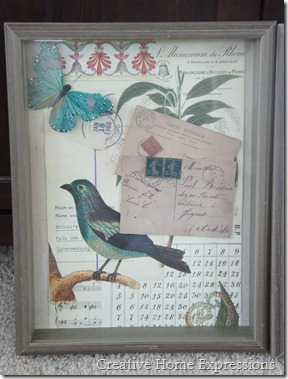 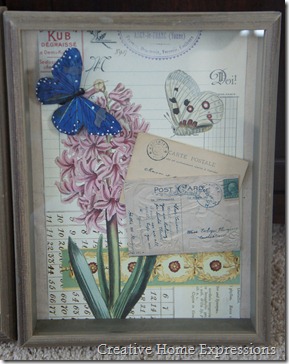 I hung them in our master bedroom above each side table. 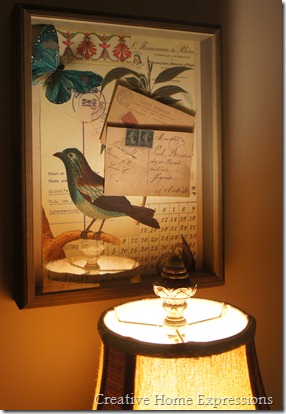 I’d show you the whole area, but the bed has a pile of whites on it waiting to be folded and put away. 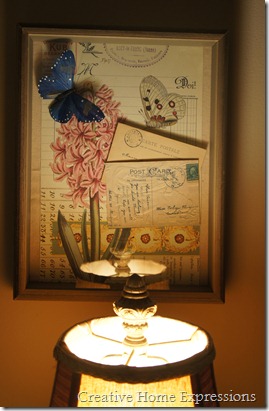 That’s my version of the Ballard Design’s Document Shadowboxes; mine cost me around $30.00 and I only had to purchase the shadowboxes.

Don’t forget my Pick Your Plum giveaway going on through April 26, 2012. This is for $75.00 worth of swag! You can see some pictures of previous giveaway items on that blog post.

Don't you just love those Cavallini calendars? I only buy them for the images! I'm actually in the process of cutting one up right now. Anyway, your project is gorgeous! Thank for sharing!

WOW Kathy they look fabulous!! Love the background images you took from your calender. Great copy!

Very cute! And I actually went into a Hobby Lobby last weekend for the 1st time while traveling - there is not one around here.
xo Cathy

Oh you're such a smart girl! I love yours even more!!!!

Just beautiful sweet Kathy!!! I love them!!! The lamp light really shows of their dimensionality too...GORGEOUS!! hugs and love, Dawn

AWESOME!!! They look SO GOOD!!! You are genius I tell you...GENIUS!

They turned out fabulous! I love your interpretation.

Now that was clever thinking Kathy. I have to say I LOVE your version so much better. Of course the price is perfect too. How pretty where you hung them too. Thanks so much for joining in on the fun.

Kathy-Well, I like YOUR version better than the ones you copied. Those are just lovely and perfect for the bedroom. Great job-xo Diana

Yours is definitely better, Kathy! You did a wonderful job! :)

Wow! Your copycat is great! You did a wonderful job! Perfect- even better!

Kathy these are gorgeous, much better than the originals! Don't you love it when you pick something up (the butterflies) and use it later in a project? I saw those butterflies but didn't buy them. Now I wish I did! Absolutely beautiful job.

Those are amazing. You really created amazing art.

Wonderful copycat Kathy. I absolutely love those calendars and have used the pages for framing.

Your version of Ballard's shadowbox is gorgeous!

What a beautiful copycat! You did a great job!

What a beautiful copy cat project Kathy! I love them!! Enjoy your day, Gail

Hi Kathy, I love your pretty shadow boxes! They look better than the originals to me.

Glad you like the blue "B"! I am looking around to see what else I can paint.
And...thanks for the nice comments on the living room. It's starting to come together. Have a great day! Kristen

What a great copycat you are! Love those. They look like you spent alot of money on them.

I love these, they're amazing.
Putting them above the lamps makes them look even more 3-dimensional.

I think I like those better than Ballard's. They are a little more colorful and I love the birds!

Thanks for the inspiration.

I love the way your shadow boxes turned out. You did a wonderful job taking inspiration from the catalog.

Thanks for the great idea, of the goodies wall boxes. When we go on nature trails in the outdoors I now know what I can do with the pressed flowers, leaves and berries I pick along the way. I can put a photograph with leaves flowers, berries and feathers in these boxes. How exciting. Thanks for the idea.
I bought my mom a Tracfone lg500g qwerty keyboard phone (just $20, $7/mnth for service) for mothers day and I thought it needed a personal touch which is why I've been searching the craft blogs for something to make. Your blog has really got my juices flowing now and boy I also love that pink chair and harlequin black and white chest of drawers it would look great in our apartment in Miami.

these turned out so wonderfully! and what a great price--tfs:)

Great project Kathy...i love those calendars...although somewhat pricey...they have such wonderful uses when the "month is over"....i loved how they turned out...

Kathy those turned out fantastic!!

Great knockoff, Kathy! I would even say I like yours better. I have a few old Cavalenni calendars, not to mention tons of scrapbook paper...you've inspired me to create some of my own!

Wow! This is a fantastic copycat! LOVE this!!! :D

I agree with many of the other commenters that I like yours better than Ballard's.

These are Beautiful! Great job!

I adore shadow boxes Kathy and you did an amazing job on yours! I love the butterflies...they are the perfect accent for this project! They would make a wonderful gift for someone too! Angie xo

You did a fabulous job with your shadow boxes and thanks for the tutorial. You are so cute saying you can't take a picture because of the whites on the bed. We can all relate to that!