What Time Is It?

Well, you wouldn’t know if you had this clock! I guess this is why it was donated to Goodwill.  No hands and no actual mechanism on the back. 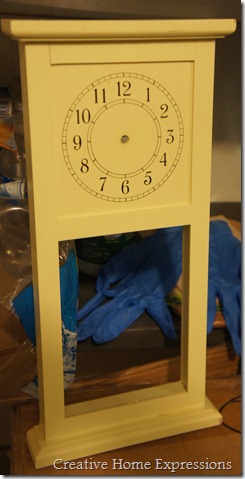 I saw some potential in this piece and I liked the clock portion at the top.  I was seeing either a chalkboard or memo board where the Irish prayer is on the lower portion {I had to stick that back in because I started taking it apart before I took pictures!}. 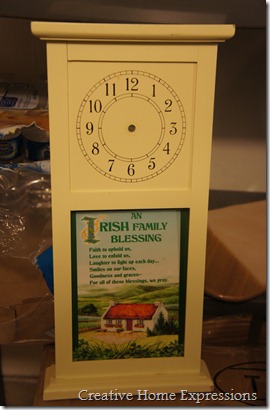 First a new look with paint.  I stopped in our local Ace Hardware {which carries Benjamin Moore paints} and bought a 2 ounce sample pot of a gray shade called Eternity {AF-695} for all of $3.99.   The clock insert got Antique White. 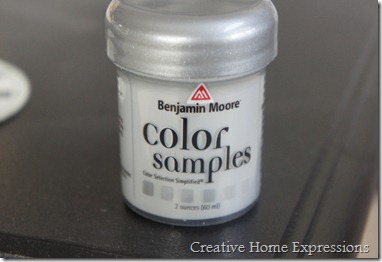 Since I painted and that meant painting over the existing clock face I used one that I found online. 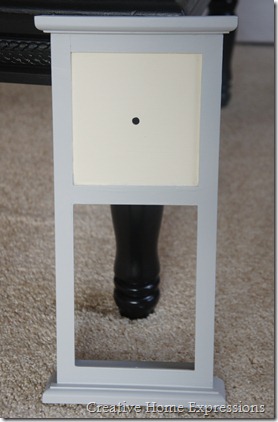 I can’t remember if this was from Karen at The Graphics Fairy or another generous blogger who was offering clock faces a few months ago.  I Mod Podged it on where the original clock image was. 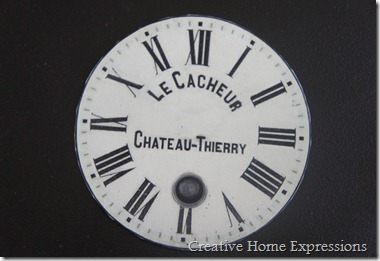 A clock kit that I had purchased for another project worked out well for this. 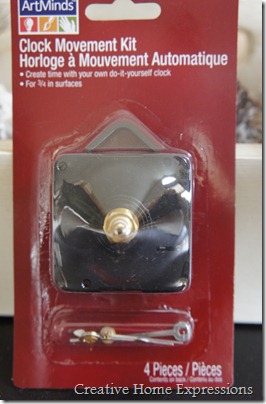 For the bottom portion, I decided to go the memo board route and used some cork that I bought a couple of weeks ago.  I covered it with a French Script fabric in grey, that I’ve had for awhile now. 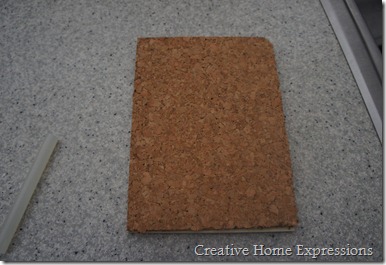 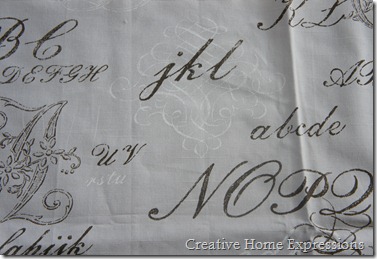 Here I just need to add the hands to the clock but I couldn’t resist taking a picture. 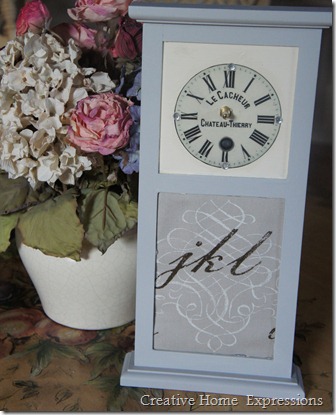 A couple of decorative push pins and it’s ready to tell you the time and hold some of your important messages.  Now for sale in my Etsy!  And, the clock works! 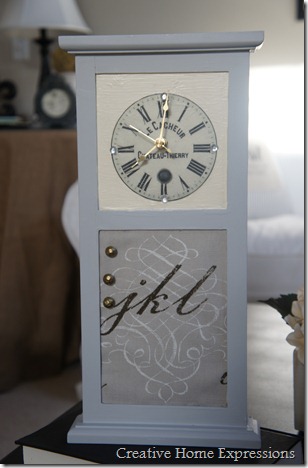 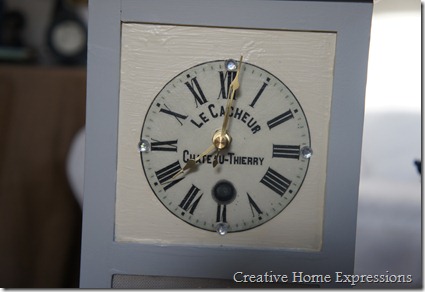 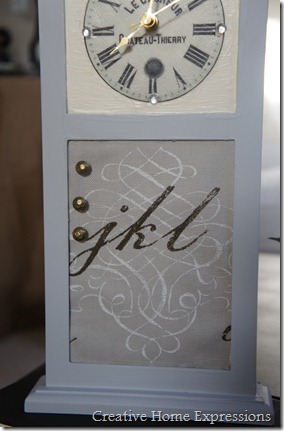 Don’t forget my Pick Your Plum giveaway going on through April 26, 2012.  This is for $75.00 worth of swag!  You can see some pictures of previous giveaway items on that blog post.

Swing Into Spring at DIY by Design

Just beautiful sweet Kathy!!!! I love, LOVE seeing a transformation like this! Taking something forgotten and now you've turned it into a one-of-a-kinds piece of art...wishing you a great week and speedy delivery of that sewing machine too! hugs and love, Dawn

Awesome transformation Kathy! That's the perfect clock for an office, Love it!!

Wow! That is a wonderful transformation.

It looks great!!! I'm the one that shared the link for the clock faces :) it was not the Graphics Fairy.

You are so totally creative. I love the redo, it looks amazing. Hugs, Marty

Sah-Weet! What a grand makeover. I LOVE it! xo Diana

Kathy, the clock looks amazing! I love everything that you did to fix it up (I have such a hard time seeing potential in a lot of Good Will items). I love how the fabric part turned out especially! ~ Jamie

What a transformation! I love it!

Hi Kathy! Oh, you're amazing! This clock looks marvelous. You did a wonderful job!
Be a sweetie,
Shelia ;)

That looks GREAT Kathy! You did an awesome job. Enjoy your day, Gail

Hey Kathy - that transformation was fantastic. I hope you can remember which blogger was offering the clock faces (cause I need one!!). I will check the Graphics Fairy.

PS - Hope you remember me from the job at Cafe Havana. Hope all is well with you in your new home in Ohio.

Kathy-that is absolutely gorgeous. I am so impressed at how you transformed this. Really beautiful.

Kathy, Goodness, what a wonderful job! I love this transformation. Now you have such a gorgeous to grace some lucky person's home!

That is an unbelievable transformation Kathy! I really love the look. Great job girl!

Great job! Thanks for sharing joann

Good eye for seeing the potential, it it is a fabulous transformation!! I love the color and the graphics

Oh! It's just darling! I bet it will be scooped up fast in your Etsy shop!

You are so talented! This turned out great! You are so clever with the decoupaging. What a transformation! Thank goodness others give to Goodwill so you can create beautiful pieces!
Angie

I'm always amazed when someone takes an item that most people would pass by, and creates something so lovely! Great choice with the color and clock face!

Wow what a fabulous makeover! That piece is totally transformed (and for the better)!

Good eye for spotting this - you're such a talented crafter. I think we should try another GW outing in Cincy next time. It's a different district and they have sales! I saw you and "the girls" had a great day in the park for a picnic. What a cute little blondie she is!

you are so clever!! beautiful!

You are on a roll! I love how you always complete so many projects Kathy! I never seem to finish any in a timely manner. Sigh...