Several years ago, I got this shoji screen for my daughter’s room {JC Penney, about $40.00}, which she used in front of her walk-in closet that had recently been redone, until we decided on a door {bi-fold, paneled, etc.}.  I got it in black. 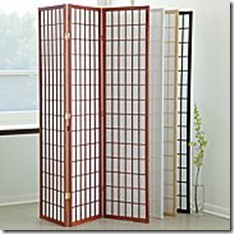 When she moved into her own apartment she took it with her and I’m sure it came in handy as a place to hide things behind.  Unfortunately, she also had gotten a kitten and as that kitten grew it scratched the paper backing and ripped it. 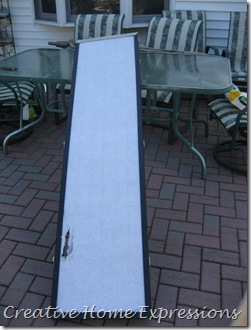 She has since moved back home {grandbaby due in July} and brought the screen with her.  Since the paper was ripped and I am allergic to cats {we figured it probably had cat hair on it}, she was going to just throw it away.  Well, I couldn’t have that.  I took it out into the yard and cut the paper off. 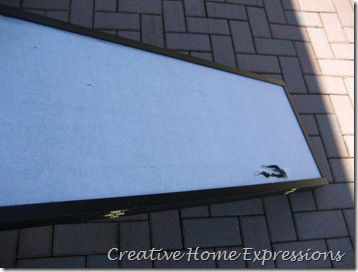 I couldn’t decide if I should do fabric or get a nice wrapping paper to adhere to the back. 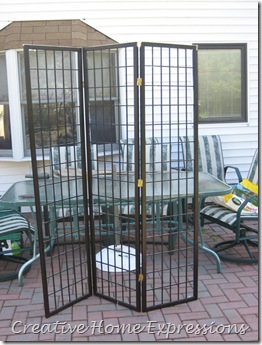 Until I could decide, I brought it back in the house and stuck it in my living room.  Which happened to have a large expanse of wall that was blank.  And, I kind of like it here! 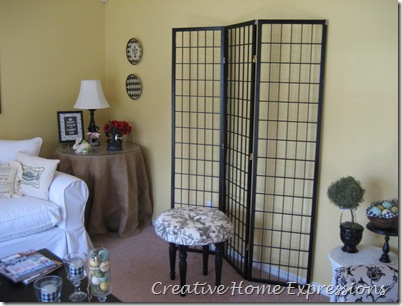 I still don’t know if I want to add something to the back of it or just leave it as is. 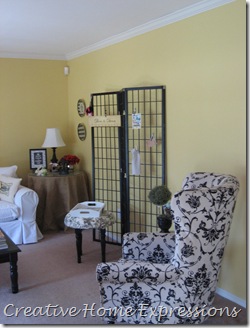 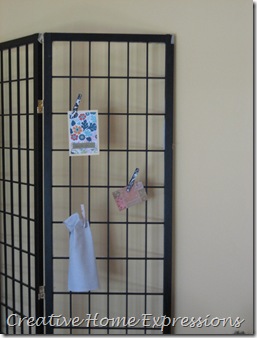 The grid kind of lends itself to decorated clothes pins or clips on it with pictures and such ~ kind of like an over-sized idea board, don’t you think?  Playing around with it for the pictures, I added this print I just got yesterday, that will be going in my boutique with several others. 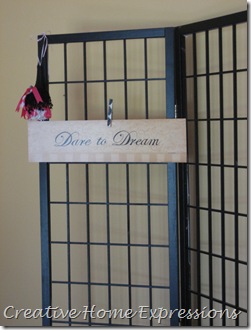 I’m going to leave it until I find that bookcase that “speaks” to me! 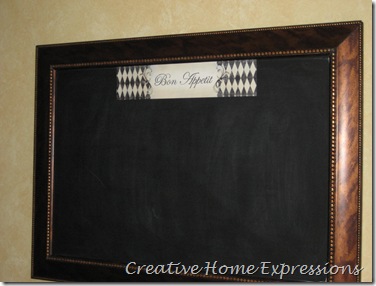 As an update to my previous post on the chalkboard I hung in my kitchen, I also used one of the prints I got yesterday {and that will also be in my boutique} on the chalkboard, or at least until I get some chalk and write on it. 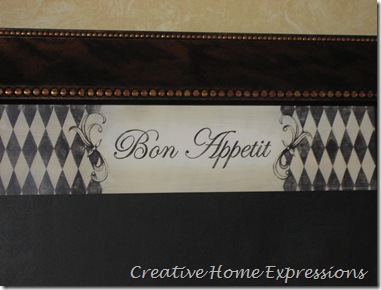 I really like it the way it is, Kathy! You can can clip photos of your new granddaughter on it!!!

I like! It's unique and cool, and has such potential for fun "clippy" ideas.

This is really great just as it! So many things that you can hang from it. Photos, framed art, mirrors. I like it!

I had one of those! I like it the way it is. It's more architecural and if you want you can clip stuff on it. Although I wouldn't do a whole lot as I think it might end of messy looking. But I like that you can see the wall through the squares!

I definitely say to keep it as is and continue hanging things on it. I've done something similar and I love it.

Yeah, it has a cool architectural quality about it. I love happy accidents! :)

Oh my goodness... that screen sure looks familiar! :)

Love the idea board thought. CLEVER. The black silouette looks wonderful against your light wall.

Thanks for linking up to SNS!
FJ Donna

Leave it as is! What a great place to display photos and such with clothes pins! Love it without the paper the more I look at it!

When I saw the empty screen I thought to myself "she could pin pictures to it". Then I scrolled down to the next photo and that was exactly what you had done! I guess great minds think alike! lol :)

Oooooh. I'm liking it without the paper. Way cool.
Pamela

Kathy~Okay, now I've got to add find (discarded) paper screen to my list of "my Kathy must haves." I do have the hubby sold on the idea of the Chandy fan. Check and mate, lol.
I've got a white louver room divider, which I adore, but it was a few $$000$$ dollars... at the time it seemed like a good deal.."NOT!"
I like your application, I'd use the screen frame in my craft room for displaying samples/ideas. You can always add fabric at a latter date if the mood strikes.

Hi Kathy,
I like how the screen looks in your room. I wouldn't put anything behind it.
You come up with the best ideas.

Kathy, I really like the screen without the backing. This way you can use clips and hang special mementos or pictures. I am also so glad you saved this from the garbage! My mom would have cringed too if I was chunkin' it...she woulda rescued it like you did.

What a great idea to use the screen frame as an inspiration board! I'll file that idea away for someday when it might be "just the thing". Thanks for stopping by my books and chairs post, Kathy!

Hi Kathy, i love the screen the way it is!! It's great to hang all your photos...Kathy

Hi Kathy! I like the screen uncovered as well. What a versatile piece. I'm with you in that something that "cool" with great potential should never be thrown away. :o)

i kind of like the idea of clipping pictures to the screen. different black and white photos of family, friends, etc. way to be creative!!

The first thing I thought of was, "That would be PERFECT for hanging a bunch of tassels from!" LOL! I'm so sad.

I think it would look great with the fabric from the footstool behind it, IF you decide to put something there. It looks great as it is, though!