Cleaning Up The Junk Drawer

I am joining in over at my friend Leslie’s Purge Party today on her blog Goodbye House, Hello Home.  I had two areas that I thought I’d tackle first.   I only got to one this weekend, but will work on the other during the week to share next week.  So, I tackled the ever popular “junk drawer” in my kitchen. 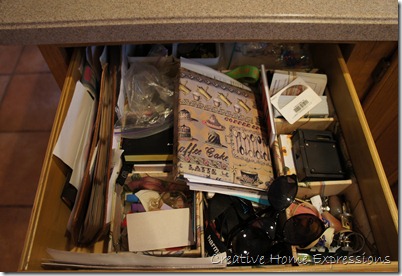 There are two organizers in there {underneath all that chaos}.   The latest addition to this junk pile are two pairs of sunglasses which both broke on me in the span of a week.  I thought I could get a glass repair kit and reattach the ear pieces.  I was at Target over the weekend and just bought two new pairs.

After taking everything out and sorting into like piles, I threw out about 85% of the stuff in this drawer.  This is what it looks like done. 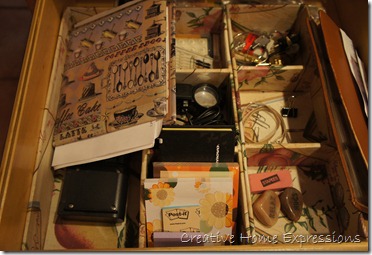 I would have had to do it sooner or later {since we are on the market}, and I guess sooner is better than later when you then have to deal with packing everything up.  Here’s a sneak peek of the next hot mess that needs to be dealt with. 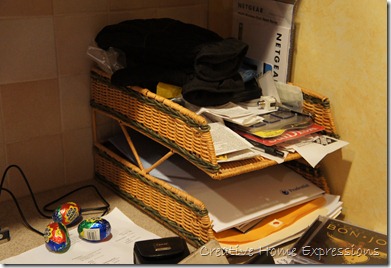 This is where hubby puts his stuff down every night.  I don’t think he’s listened to that Bon Jovi CD yet!  Oh yeah, he loves those Cadbury eggs and I had bought him a few when I was running an errand.  {I know, I’m a clutter enabler!}   I hate dealing with paper more than anything when it comes to organizing.

Posted by Kathy @ Creative Home Expressions at 6:48 AM

Your newly organized drawer looks great! It feels so refreshing and cleansing to organize, doesn't it? I'm sure your next "hot mess" (lol) will be a piece of cake. I'd start by getting rid of the Cadbury Eggs (yum)! Have a great day, Becca

What a very impressive transformation. It just takes a little effort and time to de-clutter things.

It always feels great to tackle a project like this. I think with spring right around the corner it is the perfect time to declutter.

LOL, if you find a way of keeping it organized after you do it, let me know! We are constantly cleaning out our junk drawers but in no time flat it gets messy and filled up again!!!

Kathy...Drawers are my nemesis. All of mine are junk drawers. BUT my office is free papers at the moment and everything has been filed. After doing my taxes I didn't quit until everything was put away. I didn't realize your house was back on the market. Good luck with that. Declutter away--less is more--depersonalize--you know the drill. Is there anything more stressful than selling your home? I think not.
xo, Rosemary

KATHY!
You did it!
I agree with Becca--I think the Cadbury eggs would be my incentive to tackle the next area.
Forget hubster...if he hasn't eaten the eggs by now, they're fair game ;)
a! I just get my glasses at the Dollar Tree, because, inevitably, I spend $15-$20 on a pair of new sunglasses and they get sat on, lost or scratched anyway. Nothing bad ever happens to my cheapo sunglasses.
Thank you so much for coming to the party today! I was glad to see you!
(Did you spike the punch?)
HUGS!
~me
P.S. How are the showings going?

Now this is a party I need to join but I'm afraid my before pictures would scare the bejesus out of everyone. Lol! I'm slowly organizing and de-cluttering room by room for spring.

your drawer looks great! I cleaned up clutter from my breakfast bar, dining room table, and kitchen desk this weekend. Last weekend I tackled my closet. Next weekend I am organizing (for the 100th time) my guest room closet where I keep my stash of gifts and wrapping stuff. I have really let the closets get out of order and am having to do some major work now! Somewhere down the line I will get to that junk drawer...thank God there is only one!

Hi Kathy, I have a junk drawer in my kitchen too, now you have inspired me to straighten it up, and throw away so things!!! Hope you have a wonderful week!
hugs~~~ Daphne

I never really had a junk drawer but in the past several months I seem to have acquired one and it is not a pretty sight! Now that I have seen your newly organized drawer, I feel guilty about mine and guess I better do something about it.

Hi, Kathy! I'm a clutter enabler too...and my hubs also loves the Cadbury Eggs. :) I have my share of junk drawers...you did a good job of reorganizing yours! Motivated me to take a second look at the one in my kitchen. :)

Clutter enabler!! I love it!

We all have those drawers. And every time I clean mine, I, too, throw away most of it. Those little dividers are great, I have a divided try and to keep everything neat, I straighten it up every time I go in it.

Can't wait to see what you do with hubby's little corner!

Great job! I completely understand about the hubby and their stuff that comes home with them. I finally figured out a way to hide his junk while not nagging him about it. Here, have a look:

Becky B.
www.organizingmadefun.blogspot.com
Organizing Made Fun

Kathy, we have several things in commong.
First, I have one of those popular kitchen drawers. Wait 'til you see mine. I might share it at one of the Purge Parties.
Second, I have one of those double wicker paper trays too and ours looks almost identical.
Third, my husband adores Cadbury eggs. ;)
And fourth, I HATE organizing paper more than anything else. Sigh...which reminds me...:(

Glad I stopped by. I'll join the Purge Party later tomorrow.
Much love!